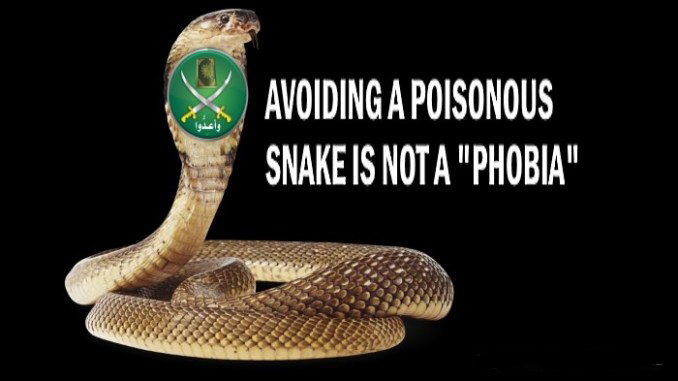 All phobias are, by definition, irrational fears. I’m not an Islamophobe, because my “fear” of Islam is completely rational. Avoiding a poisonous snake is a rational fear. Not a phobia. The emotion of fear, when utilized rationally, is of immense value. The key point is that the person, as well as the society, must base their assessment on facts. My assessment of Islam, conclusively supported by indisputable facts, is that it is a dangerous, destructive and death-bearing belief system of a long-ago savage people that has inflicted and continues to inflict misery and death to people.  According to Christopher Hitchens, Islamophobia is a word created by fascists, and used by cowards, to manipulate morons.

Let me add this, I will speak the truth about Islam. In no way am I falsely defaming Islam. Islam is its own best defamer. Speaking the truth usually entails risks. I’m aware of that. Sharia law stipulates that any Muslim who turns his back on Islam should be given a chance to revert to the religion. For an un-repenting male apostate, death is the punishment and life imprisonment for a female apostate.

Some Muslims call us Islamophobes while others call us racists, even though they know Islam is not a race, but they know how to get under the skin of Americans by calling us racist.

Ever since the massive arrival of Muslims to the Western hemisphere, our Western culture and world have been forever altered, thanks to the ceaseless attempts of the left to create a failing Utopian multiculturalist paradise while forcefully jamming it down the throats of unsuspecting citizens. Here is the problem:

The West has been tolerant, but “tolerance in the face of evil is not tolerance, it is a crime.”  It wasn’t long ago; we were defending ourselves at the Gates of Vienna from a Muslim invasion. Now, we welcome Muslims with open arms and generous welfare policies. Any push back to these open immigration practices is labeled Islamophobia, racism, bigotry, etc. But what cost do these changes bring?

The battle with these barbarians has been proven to be arduous and long. It is the duty of all enlightened individuals to work their hardest to fumigate these leeches from the body of humanity. Civilized people refuse to accept that Muslims have not evolved. They are at least 2,000 years behind humanity. The conflict with Islam and Muslims is due to evolution. Evolution takes time.

That is precisely why the percentages of rape have gone from non-existent in Europe, to 5,000%.  Whether we like to accept it or not, reality is reality.  We will eventually come to terms with reality and accept that Muslims are pure savages. It is impossible to co-exist with this 7th century mentality.

People fear Islam because Islam kills you. They fear Islam because they don’t want to lose their heads. Islamophobia is completely justified. It is important that we take a close look at the Quran, the inviolable, immutable charter of Islam, since it enjoys such sanctified standing. Muslims believe that the Quran is written by Allah himself. Allah handed down the book, piece by piece and chapter by chapter, to the Archangel Gabriel. Gabriel, in turn, whispered these words to Muhammad himself over the course of some 23 years.

Allah is so angry in the Quran. It seems to me that Allah is angry at himself. Much of the smallish book, the Quran, that he authored over 23 years is devoted to expressions of displeasure, anger, threats and violence. Didn’t Allah create people, animals and everything else? Didn’t he instill in us and in everything else his own design? Then why all these venomous expressions in the Quran? Why not devote the book to saying that which would make us better, if that is possible, since Muslims claim that his work is perfect?

Islam is anything but a religion of peace. Violence is at the very core of Islam. Violence is institutionalized in the Muslims’ holy book, the Quran in many Suras. That is why people fear Islam, hence, Islamophobia is justified.

The Kick Them All Out Project
https://kickthemallout.com/article.php/Justifying_Islamophobia