The Heartland Institute compiled the report using satellite and in-person surveys of NOAA weather stations that contribute to the “official” land temperatures in the United States.

“With a 96 percent warm-bias in U.S. temperature measurements, it is impossible to use any statistical methods to derive an accurate climate trend for the U.S.” Heartland Institute Senior Fellow Anthony Watts, who directed the study, said is the study announcement distributed to the press. “Data from the stations that have not been corrupted by faulty placement show a rate of warming in the United States reduced by almost half compared to all stations.” 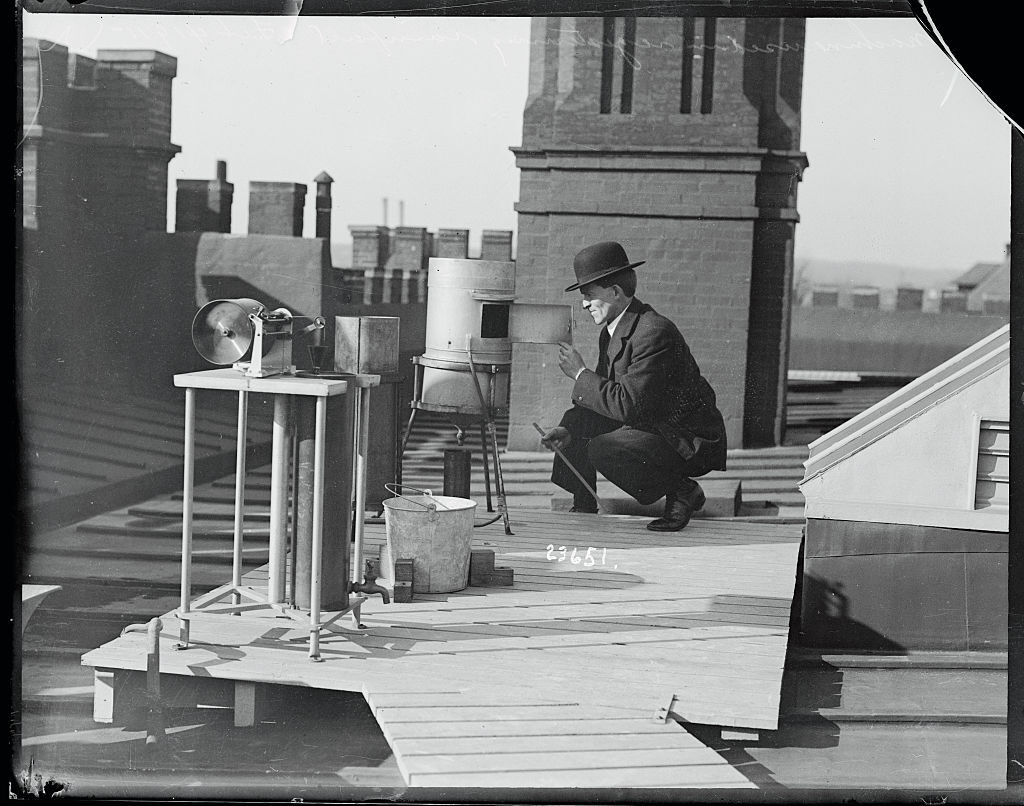 File/In the past, thermometers received by the bureau were tested before being sent out
to stations throughout the U. S. as seen here circa 1915. (Bettmann /Contributor/Getty)

“NOAA’s ‘Requirements and Standards for [National Weather Service] Climate Observations‘ instructs that temperature data instruments must be “over level terrain (earth or sod) typical of the area around the station and at least 100 feet from any extensive concrete or paved surface,’” the press release said. “And that ‘all attempts will be made to avoid areas where rough terrain or air drainage are proven to result in non-representative temperature data.’

Heartland reported the study reveals that instruction is regularly violated.

The study’s forward said, in part:

The National Weather Service (NWS) Cooperative Observer Program (COOP) is a network of daily weather observations taken by more than 8,500 volunteers. These data, which include observations from the late 1800’s, are vital to understanding the U.S. climate, and also provide near real-time information that supports forecasts, warnings and alerts, and other public service programs. Observations are taken from around the U.S. and its territories at National Parks, seashores, mountaintops, farms, and many urban and suburban areas. COOP data usually consist of daily maximum and minimum temperatures, snowfall, snow depth, and 24-hour precipitation totals. Observations may include additional hydrological or meteorological data such as evaporation or soil temperatures.

This report follows a March 2009 study, titled “Is the U.S. Surface Temperature Record Reliable?” which highlighted a subset of over 1,000 surveyed stations and found 89 percent of stations had heat-bias issues.

Now the problem has increased, according to Heartland’s team of researchers.

“The original 2009 surface stations project demonstrated conclusively that the federal government’s surface temperature monitoring system was broken, with the vast majority of stations not meeting NOAA’s own standards for trustworthiness and quality,” the announcement said. “Investigations by government watchdogs OIG and GAO confirmed the 2009 report findings,” H. Sterling Burnett, director of the Arthur B. Robinson Center on Climate and Environment Policy at The Heartland Institute who surveyed NOAA surface stations himself this spring, said.

“This new study is evidence of two things,” Burnett said. “First, the government is either inept or stubbornly refuses to learn from its mistakes for political reasons. Second, the government’s official temperature record can’t be trusted. It reflects a clear urban heat bias effect, not national temperature trends.”

Trackback URL for this entry: https://kickthemallout.com/trackback.php/Garbage_in_Garbage_Out-96_Percent_of_NOAA_Temperature_Stations_Fail_Uncorrupted_Placement_Standards