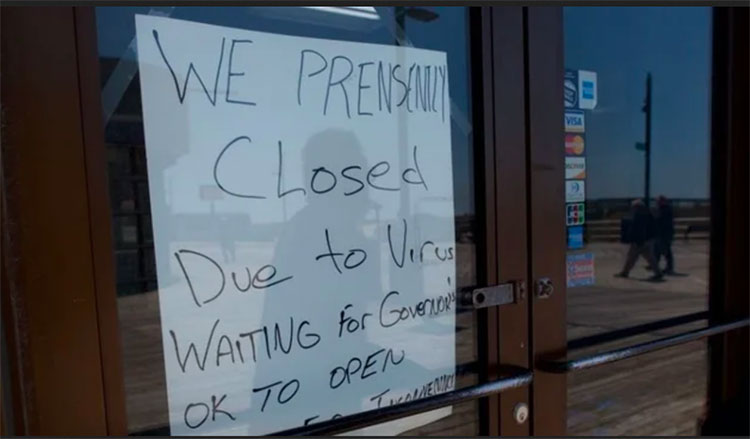 The U.S. economy shrunk at a seasonally adjusted annualized rate of 32.9 percent during the second quarter of 2020 as the first wave of the coronavirus pandemic spurred an economic collapse of record-breaking speed and size, the Commerce Department reported Thursday.

Between April and June, U.S. gross domestic product (GDP) shrunk at a pace that would have wiped out roughly a third of the value of the economy if extended over 12 months, according to the Commerce Department’s advance estimate of second-quarter growth. It is the largest one-quarter plunge in economic growth since the federal government began reporting quarterly GDP data.

“This was the steepest decline since the start of the global financial crisis in 2008, when output shrank by 8.4%,” wrote Agathe Demarais, global forecasting director at The Economist Intelligence Unit in a Wednesday preview of the report. “The scale of the fall in the first quarter will be dwarfed by that in the second.”

On a non-annualized basis, GDP shrunk roughly 9.5 percent between the first and second quarters of 2020.

The staggering decline in GDP growth was widely expected by economists after the onset of the coronavirus pandemic forced millions of Americans into quarantine and out of work. More than 20 million Americans lost their jobs in March and April as thousands of businesses were forced to close and lay off their workers.

The mass layoffs and business closures derailed consumer spending, sapping a crucial source of strength for the U.S. economy that drives roughly two-thirds of annual growth. Spending on goods and services plunged at a seasonally adjusted annualized rate of 34.6 percent in the second quarter, another record-breaking plunge.

“Consumption is the biggest component of GDP — almost 70% — so this drop alone will have subtracted some 24 percentage points from headline growth,” wrote Ian Shepherdson, chief economist at Pantheon Macroeconomics in a Thursday research note.

While the economy has since regained roughly 8 million of the jobs lost during the pandemic, a second surge of cases has slowed the burgeoning recovery. Permanent job losses increased in each of the past two monthly jobs reports despite strong net totals and the number of unemployed Americans applying for weekly jobless benefits has remained above 1 million for four months.

The Labor Department reported on Thursday that initial unemployment claims rose for the second week in a row to a seasonally adjusted 1.43 million for the week ending July 25. Another 829,000 jobless workers applied for benefits through the Pandemic Unemployment Assistance program for contractors and gig workers not typically covered by traditional unemployment insurance.

The Trump administration, Senate Republicans and Democratic congressional leaders are struggling to strike a deal on another economic rescue package to guide the U.S. through the pandemic-driven recession. Lawmakers have already missed a window to come to an agreement before enhanced unemployment benefits effectively lapsed and a federal eviction and foreclosure moratorium expired on July 25.

Economists have warned that the steep decline in fiscal support from Congress and the impact of a second wave of coronavirus infections could cause deep long-term damage to the U.S. economy that could take years to reverse.

“While the initial rebound in monthly activity was stronger than expected, the recent flattening in high frequency indicators suggests a more gradual pace of recovery from here,” wrote economists at Nomura in a Wednesday research note.

Trackback URL for this entry: https://kickthemallout.com/trackback.php/GDP_Shrinks_Record_33_Percent_In_Second_Quarter_Amid_Virus_Lockdowns