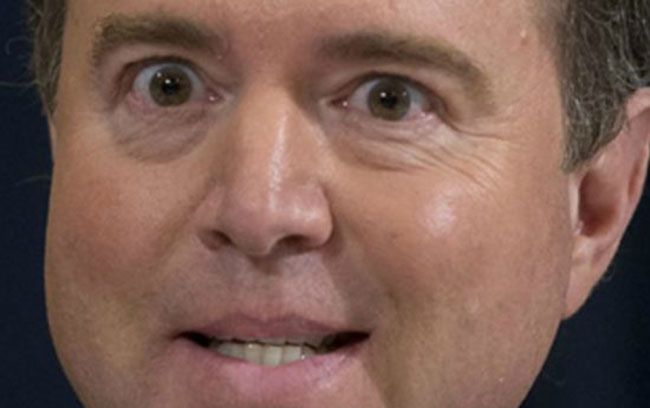 In December 2018, the soon-to-be Speaker of the House, Nancy Pelosi, was busy making changes in the House rules for the incoming 116th Congress. She was actually setting the stage for her anticipated impeachment of President Trump. At the time, The Conservative Treehouse’s “Sundance” wrote, “Remember when we warned [November 8th, 2018] that a convergence of left-wing groups, activists, DNC donors and specifically the Lawfare team, would align with (and meet) incoming Democrat leadership to construct a road-map for the “resistance” priorities? Well, exactly that planned and coordinated outcome is visible as incoming Speaker of the House Nancy Pelosi presents her new rules for the 116th congress.”

It appears there was one House rule Pelosi forgot to change and it may come back to bite them. That would be the “Minority Witness Rule (Clause 2(j)(1) of Rule XI).”

In a letter to Rep. Adam Schiff (D-CA), signed by the Republican members of the House Intelligence Committee, House Minority Leader Kevin McCarthy (R-CA) informs the chairman they are exercising their right to “convene a hearing with witnesses selected by the Minority to testify in the Democrats’ “impeachment inquiry.”” McCarthy writes:

As the Committee continues to conduct the Democrats’ partisan and one-sided “impeachment inquiry,” there are still important perspectives and serious issues that you have prevented the Committee from examining. We will inform you of the witnesses we intend to call once you have provided a hearing date and time to which we agree. “Your failure to schedule this hearing shall constitute evidence of your denial of fundamental fairness and due process.

By Thursday, the third day of the public impeachment inquiry, Democrats were claiming that U.S. military aid flowed to Ukraine on September 11, only because President Trump "got caught" in his alleged quid pro quo when a whistle-blower came forward.

But who got caught? Rep. Devin Nunes (R-Calif.), the ranking member of the House intelligence committee, asked in his opening statement. Democrats did, he explained:

Nunes noted that temporary holds on foreign aid happen "fairly frequently" for different reasons. "So how do we have an impeachable offense here when there is no actual misdeed and no one even claiming to be a victim?" he asked.

The Dems hoped the Mueller witch hunt would dig up something, anything they could use to impeach Trump but as we all know, it failed miserably. Now they are engaged an even worse fraud with the Ukraine hoax to try and justify impeaching the President.

These bastards have NEVER accepted the outcome of the 2016 election and NEVER engaged in the peaceful transition of power in the Executive Branch.

Save yourself 10 hours and watch the highlights from the 4th impeachment hearing with Ambassador Sondland.

Editor's Note: This proves beyond any doubt what a deliberate sham/fiasco this whole fake impeachment charade really is.  This so-called star witness deliberately left out the most important information from his long opening statement in order to paint a totally false narrative.  Thankfully we have Jim Jordan who takes him to task and exposes the truth that there is literally NOTHING REAL ABOUT ANY OF IT!

No quid pro quo.
No extortion.
No bribery.
Ukraine RECEIVED: A meeting AND Security assistance.

MORE TRUTH EXPOSED!!  The whole thing is made up bull shit!

.@RepMikeTurner: "Is it correct no one on this planet told you that @realdonaldtrump was tying this aid to the investigation? If your answer is yes, then the Chairman is wrong and the headline on @CNN is wrong."

Rep. Elise Stefanik, R-N.Y., read several news articles that quote Adam Schiff, the House Intelligence Committee chair, talking about how lawmakers would hear from the whistleblower at the center of the impeachment inquiry. Stefanik read the news headlines on Nov. 15, the second day of a public hearing as part of the impeachment inquiry into President Donald Trump. Stefanik referred to the "abuse of power" in the proceedings by Schiff and the Democrats, citing the news articles to support her assertion. Stefanik then yielded the rest of her time to Rep. Jim Jordan, R-Ohio, who continued the criticism of Schiff. The impeachment probe centers around a July phone call in which Trump asked the president of Ukraine to investigate former vice president and 2020 presidential candidate Joe Biden and his son, Hunter. Yovanovitch has testified that she was forced out of her position after Trump’s personal lawyer, Rudy Giuliani, engineered a smear campaign against her. 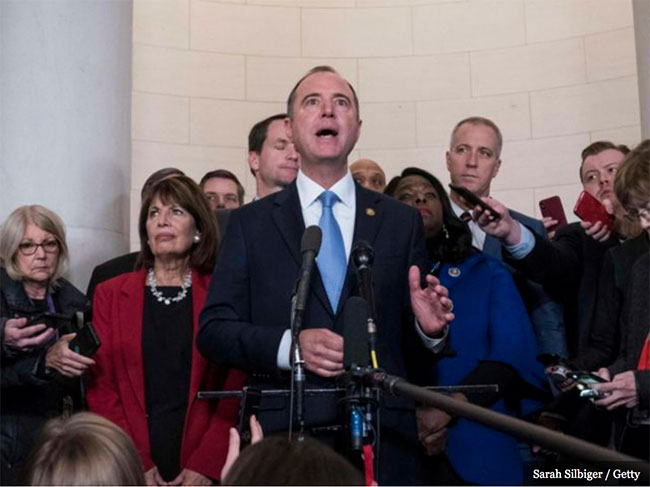 By Joel B. Pollak
Breitbart.com

Democrats on the House Intelligence Committee released the long-awaited transcript from senior National Security Council official Tim Morrison on Saturday, and immediately distorted it for the benefit of the anti-Trump media.

It was a typical example of how Rep. Adam Schiff (D-CA) and his staff have tried to skew the fact-finding process in an effort to inflate public support for impeachment, believing few will read the lengthy transcripts for themselves.

First, the committee withheld the transcript since October 31, only releasing it after the first public hearings began last week. Morrison’s testimony was rumored to be very good for President Donald Trump’s defense — Rep. Mark Meadows (R-NC) had described Democrats in the room during the closed-door hearing as “sucking lemons” — and Republicans would have made good use of it, had they had the transcript available. But it was not provided.

In the interim, Democrats had sole possession of the document. Schiff does not allow copies of the transcripts to be released to Republicans, either in paper or electronic form. If they want to read transcripts, they must do so one by one, in the presence of a Democrat committee staffer. Not only is that rule humiliating, but it also allows Democrats to control the flow of information and to prepare their public arguments with no fear of timely Republican rebuttal.

In the Morrison case, Democrats released “key excerpts” that highlighted the few facts in his testimony that, they believe, help push the case for impeachment. Chief among these is that Morrison confirmed that he heard U.S. Ambassador to the E.U. Gordon Sondland claim that he told a Ukrainian official, in a private “sidebar” meeting, that aid would be released if the Ukrainian prosecutor general would publicly announce an investigation into Burisma.

On the first day of public impeachment hearings, Intel Committee Chairman Adam Schiff said he did not know the identity of the whistleblower. However, the former Chief of Staff for the National Security Council told One America's Emerald Robinson that Schiff’s claim does not line up with what the congressman has said in the past.