Former FBI boss James Comey talked with mentor and close friend Robert Mueller within hours after he was fired by President Trump, according to Bureau insiders with direct knowledge of the correspondences.

The first conversation between Mueller and his FBI protégé reportedly took place while Comey was traveling home from Los Angeles on a chartered Gulfstream Aerospace commissioned by the Justice Department, according to high-level FBI sources.

Neither Comey nor Mueller have publicly disclosed corresponding with each other between the eight days Comey was fired and Mueller was hired to run the Trump Russia investigation as Special Counsel.

Comey traveled on the FBI charter flight with a security detail which included five male FBI agents, sources said, in addition to a civilian flight crew. No one else was on the private flight which was chartered from a private corporation. The Justice Department did not own the twin-engine jet, sources said.

Comey was fired on May 9, 2017 while he was visiting the FBI’s Los Angeles Field Office.

One week later on May 16, the first story of Comey’s secret memos about Trump surfaced in the New York Times, alleging the memos could prove President asked Comey to rig the Michael Flynn investigation. Those claims were recently debunked after Comey’s memos were made public this month.

At that time, Rosenstein said the special counsel was needed to ensure the “American people to have full confidence in the outcome” of the Russia investigation.

“The public interest requires me to place this investigation under the authority of a person who exercises a degree of independence from the normal chain of command,” Rosenstein wrote.

There was no mention that “independent” investigator may have spent hours working with Comey and his legal associates to ensure his appointment to the position. Likewise, Rosenstein did not notify Attorney General Jeff Sessions or the White House about his decision to appoint Mueller until after he was hired, sources said. Rosenstein is overseeing the Russia investigation because Sessions recused himself. 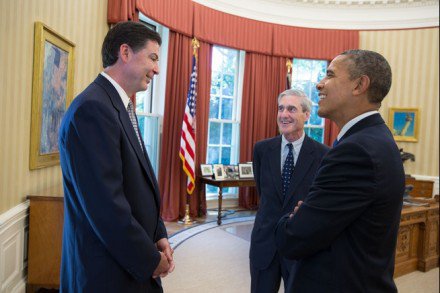 In the eight days between Comey’s firing and Mueller’s hiring, the friends — who were both not Justice Department employees at the time — corresponded about Comey’s plight and likely strategized Comey’s “next moves” as one Justice Department insider labeled their correspondences, FBI insiders said.

Comey has never disclosed this publicly or in Congressional testimony, however, or during his scorched-earth anti-Trump book tour during media interviews. That’s because he was never asked to detail his interaction with Mueller in the days and hours after his firing. Comey testified on June 8, 2017 in front of the Senate Intelligence Committee about being sacked as FBI director and his role in the Trump Russia probe; yet not one lawmaker asked him if he had any contact with Mueller before he was appointed Special Counsel.

In retrospect, that certainly seems odd, especially since it was public knowledge Comey worked with Mueller after he was appointed Special Counsel to work out what he was allowed to say during Congressional inquiries. That move — Mueller coaching Comey on testimony — was quite unorthodox too, sources and critics have complained.

Was it Mueller who suggested — during the week after his firing — that Comey leak his memos to the New York Times with the purpose of getting himself appointed as Special Counsel to ‘investigate’ his old friend?

Now, a year after watching Mueller and his team’s behavior — which boasted the partisan anti-Trump text rantings of former Special Counsel investigators Peter Strzok and Lisa Page — that seems more than plausible.

Comey and his ‘legal team’ worked with Mueller in concert to have Comey’s memos leaked to ultimately concoct a scheme to have his former FBI boss and friend put in charge of the Trump Russia investigation.

“These guys are career bureaucrats and very slick,” one FBI insider said. “They both know the system’s ins and outs and on top of that, they are friends.”

During his Senate testimony, Comey time and time again boasted Mueller was the right man for the job and the Russia investigation was in capable hands under Mueller. Comey’s testimony, at times, sounded like a glowing and cheesy Amazon.com review of Mueller’s prowess.

“Bob Mueller is one of these country’s great pros and I’m sure you’ll be able to work it out with him to run it in parallel,” a smitten Comey testified during the June 8 Senate proceedings.

The entire intelligence apparatus of the United States recognize Comey and Mueller are close friends and associates who have worked together since the early 1990s but Comey likely disagrees.

At least recently while the cameras were rolling. Comey, in fact, has worked diligently during his book tour in recent weeks to distance himself from Mueller. His description of his relationship with Mueller during a recent ABC News interview borders on preposterous.

JAMES COMEY: Yes, in this sense. First of all, the American people can have complete confidence in Robert Mueller. As I said– earlier, he and I are not close friends, but I’ve known him and watched his work–

JAMES COMEY: Yeah. I think we played golf once in our 25 years. And– sorry, and– and I’ve had dinner with him maybe once or twice. So I know him and I can s– and I– we’re friendly. But I know his work most of all. And I’ve watched it closely. He’s not on anybody’s side. He does not care about anything except the truth. And so they can have great confidence if Bob Mueller is let– left in place to do his job, he will find the truth.

If Comey and Mueller were not friends, why were they speaking within hours after Comey was fired as FBI director and before Mueller was hired as Special Prosecutor?

Did Comey contact Mueller before he called his wife? Who else did he talk with immediately after he was sacked? These are questions any solid investigator would ask. Or seek records to answer such queries.

Comey recounts the chartered DOJ flight back to Washington. D.C. minutes after he learned he was fired from the FBI.

Comey said he pulled out a bottle of red wine from his suitcase that he was bringing back from California and drank some of it from a paper cup while looking “out at the lights of the country I love so much as we flew home.”

As the plane neared Washington, Comey said he asked the pilots if he could sit with them in the cockpit because he wanted to watch them as they worked.

“So they put the headphones on me and I sat on a jump seat between the two pilots and watched them land along the Potomac,” Comey said. “And then we shook hands with tears in our eyes, and then I left and got driven home.”

Certainly the narrative movies are made of but reality is always more messy than Hollywood plot twists and melancholy endings.

Let’s see Mr. Comey’s and Mr. Mueller’s phone records and email between the time Comey was fired and Mueller was hired. Include the otherwise obscure records from the in-flight phones on the chartered Gulfstream.

Certainly those closely-guarded records are not part of any well-scripted happy ending for the embattled FBI.

But who in power in D.C. has the guts to do anything about it? Perhaps that is the bigger question. 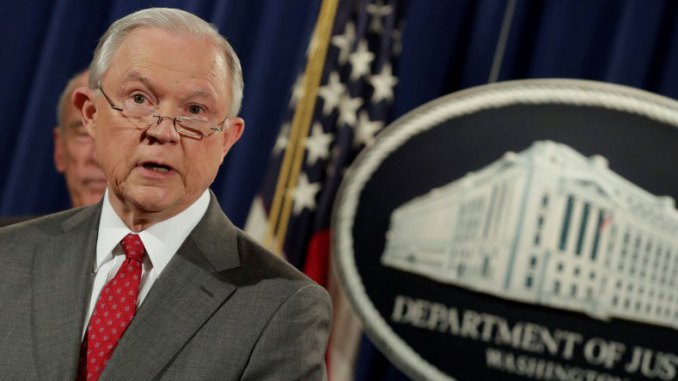 Attorney General Jeff Sessions has finally announced an investigation into the use of federal money to fund radical leftwing advocacy groups.  In making the announcement Sessions cited that at least six billion dollars was funneled into what was essentially a slush fund for Obama’s army of street activists.  It’s almost a certainty that that amount is going grow significantly.

The scheme called for Obama’s Attorneys General Eric Holder and Loretta Lynch to direct lawsuit settlements, including punitive settlements, to thirty parties who were not part of the DOJ’s legal action.

The punitive damages should have legally gone directly to the U.S. Treasury for the benefit of taxpayers.  Instead, Citigroup and Bank of America were among a number of large U.S. corporations that were shaken down in this manner to fund these anti-American radical protestors that gave Obama cover as a moderate as he moved us closer to his vision of a Marxist-open borders utopia.

Judicial Watch President Tom Fitton on how the FBI raided the home and office of President Trump’s lawyer Michael Cohen.

New reports have emerged that dozens of House Democrats waived the background checks on the #AwanBrothers -- the House I.T. aides handling their cybersecurity and with access to their email systems. Judicial Watch President Tom Fitton went to Capitol Hill last year to help shine a spotlight on the ongoing #AwanBrothers I.T. scandal in the House of Representatives that the mainstream media -- and, sadly, even our Justice Department and much of Congress -- are all ignoring.

This is a story that involves political corruption, alleged cybersecurity breaches, the potential sharing of private constituent info, possible large-scale fraud, cover-ups, and threats to our national security.

President Donald Trump’s administration is urging Congress to reshape the Sen. Elizabeth Warren-crafted consumer finance agency before it can be used as a tool for “tyranny.”

“The [Consumer Financial Protection] Bureau is far too powerful, with precious little oversight of its activities,” CFPB acting director Mick Mulvaney said in a statement Monday. “The power wielded by the Director of the Bureau could all too easily be used to harm consumers, destroy businesses, or arbitrarily remake American financial markets.”

“The structure and powers of this agency are not something the Founders and Framers would recognize,”Mulvaney argued in his letter accompanying the report. The CFPB appears tyrannical in that it appears to accumulate “legislative, executive, and judiciary, [powers] in the same hands,” Mulvaney suggested, quoting from James Madison’s “Federalist Number 47.” Such an accumulation of power “may justly be pronounced the very definition of tyranny,” Madison wrote.

Taxes are no longer necessary. This video exposes a deliberate and massive accounting shell game/swindle that is perpetrated by every government agency from your local school district all the way up to the Federal government.  This is the second Version of this expose' on public finance. Similar to first version, but incorporating input from Walter Burien and Clint Richardson.