McMaster is a foreign intelligence agent for the multi-national combine controlled by Soros, which explains why he’s constantly running interference to President Trump’s agenda.

“I have confirmed from sources from inside the White House, the Israeli government and Israeli intelligence that the Israelis have intercepted email communications from General McMaster to George Soros, informing him of everything that’s going on inside the White House,” reported Infowars correspondent Roger Stone. “…I have double checked this with two different sources very high up in Israeli intelligence, and I actually expect the Israeli ambassador to the US to confirm this.”

This means, by implication, that McMaster is one of the primary leakers given that Soros has vast ties to the mainstream media.

It is already known that McMaster was a member of International Institute for Strategic Studies which was funded by Soros’ Open Society Foundation and another Soros-financed group.

WASHINGTON – Millions of migrants mostly from Africa and the Middle East have swarmed Europe in the last three years – the result of what has been explained by world leaders as a war-driven “refugee” crisis.

Yet, a United Nations document, prepared in the year 2000 and rediscovered by WND, reveals the U.N. was already promoting the notion of “replacement migration” in Europe with the support of open-borders non-governmental organizations and “progressive” politicians.

The document – “Replacement Migration: Is It a Solution to Declining and Aging Populations?” – details the plunging birthrates across Europe and identifies a solution: mass immigration.

The 17-year-old document contended mass immigration was necessary to replace the aging populations of developed countries. Without the migration of populations from the developing world, it reasons, economies will suffer because of labor shortages and falling tax revenues.

“Therefore, among the demographic variables, only international migration could be instrumental in addressing population decline and population aging in the short to medium term,” the report concludes.

The report specifically targets the U.S., Germany, Britain, France, Italy, Japan, South Korea and Russia as prime candidates for replacement migration. It is not an obscure study, written and then ignored, but a founding piece of the pro-migration agenda pushed by the United Nations, the U.S. Chamber of Commerce and open-borders advocates.

For the New World Order, a world government is just the beginning. Once in place they can engage their plan to exterminate 80% of the world's population, while enabling the "elites" to live forever with the aid of advanced technology. For the first time, crusading filmmaker ALEX JONES reveals their secret plan for humanity's extermination: Operation ENDGAME.

Jones chronicles the history of the global elite's bloody rise to power and reveals how they have funded dictators and financed the bloodiest wars—creating order out of chaos to pave the way for the first true world empire. Watch as Jones and his team track the elusive Bilderberg Group to Ottawa and Istanbul to document their secret summits, allowing you to witness global kingpins setting the world's agenda and instigating World War III. Learn about the formation of the North America transportation control grid, which will end U.S. sovereignty forever. Discover how the practitioners of the pseudo-science eugenics have taken control of governments worldwide as a means to carry out depopulation. View the progress of the coming collapse of the United States and the formation of the North American Union. 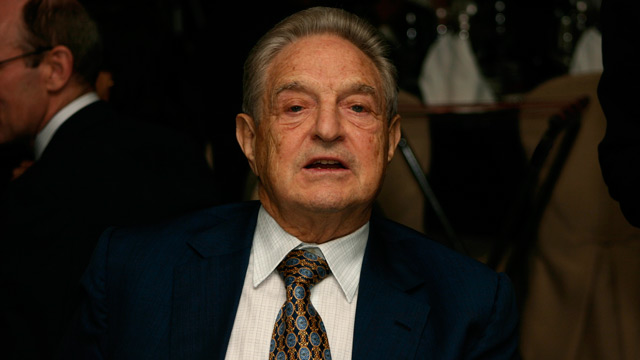 As the Left continues to lose the battle for America's soul, its greatest champions are going full-out in an attempt to turn the tide any way they can – even if it means destroying the country.

One of the vilest among them is billionaire George Soros, a Hungarian-born U.S. citizen who now seeks to demolish the country that gave him his riches along with its allies.

As reported by Breitbart London, Soros recently publicly confirmed that, yes, he seeks to essentially wipe out all European borders following an accusation made last week by the prime mister of his birth country, Viktor Orban (who, unlike Soros, actually has to deal with the tens of thousands of second- and third-world migrants streaming into his country and other European nations – while Soros lives free of such inconveniences in his $10 million mansion/castle outside of New York City).

"This invasion is driven, on the one hand, by people smugglers, and on the other by those (human rights) activists who support everything that weakens the nation-state," Orban said. "This Western mindset and this activist network is perhaps best represented by George Soros."


'Let's take down all borders'

Following Orban's statement, Soros sent an email to Bloomberg Business, in which he claimed that his foundations actually help "uphold European values," while Orban's actions in bolstering the Hungarian border and thus impeding a huge influx of migrants "undermine those values."

The Central Banks have been buying corporate stocks. The Federal Reserve has been buying stocks likely through companies like Citadel Capital.   Max Keiser

Never forget that Federal Reserve Vice-Chairman Stanley Fischer used to be the Governor of the Bank of Israel. He holds dual US-Israeli citizenship and was brought here in 2014 to oversee the demise of the US Dollar.  Vidrebel

Hint: Stanley Fisher used to be a professor of economics. He was a mentor to Ben Bernanke and Mario Draghi. That is all you need to know about him.

David Rothkopf was the Managing Director of Kissinger Associates back in the 1990s. He wrote the book Superclass in which he said that the world was run by 30 Families and their 6,000 Minions. The Thirty Families are the New World Order. The NWO wants to replace the sovereign decision making authority of more than 100 nations with their Absolute Power. One World government would remove the facade of democracy.

The trade treaties TPP and TTIP would have taken power away from sovereign nations and turned it over to corporations. A Swiss study found that 147 corporations controlled 20% of world trade. The 30 Families and their 6,000 Minions wanted these companies to be above the law and to exploit consumers in all nations without recourse to law. So what if you have studies proving Genetically Modified Organisms are harmful to human and animal health. You will eat your GMO and not talk back.

The TPP and TTIP treaties would have been stepping stones to a One World government.

Proof that the NEW WORLD ORDER has been planned by the elite. Robert Welch, Founder of The John Birch Society, predicted today's problems with uncanny accuracy back in 1958 and prescribed solutions in 1974 that are very similar to Ron Paul's positions today. This is proof that there are plans in place by the elite to systemically disassemble US sovereignty. I wonder who those elite are.

1958 Speech By Robert Welch
Founder of the John Birch Society