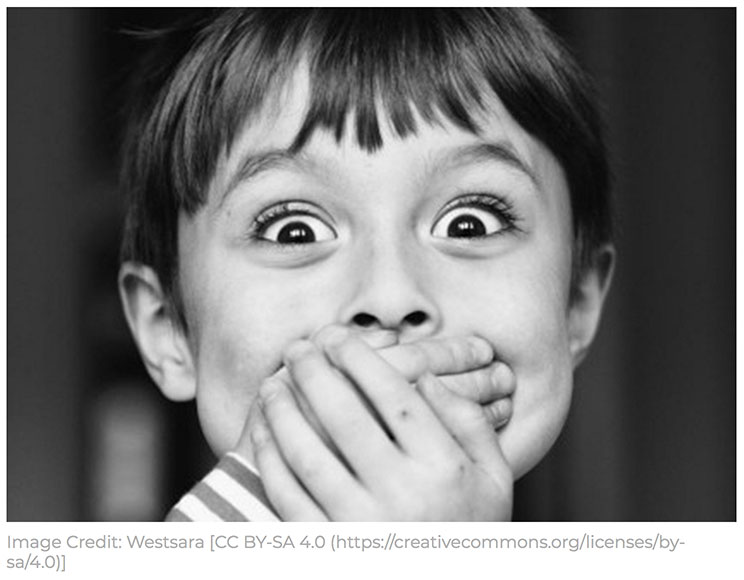 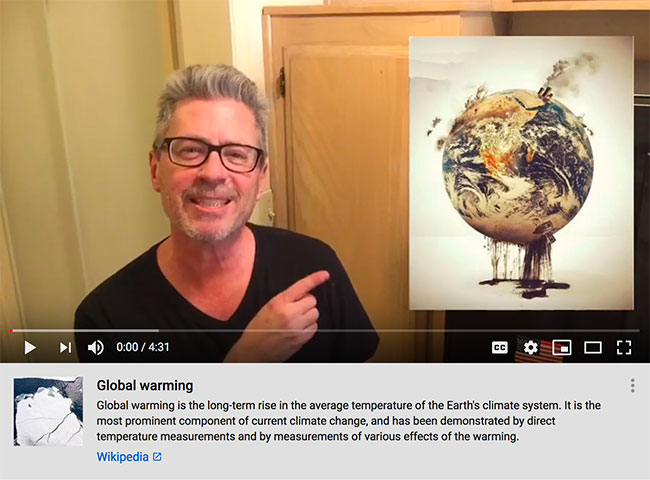 Do you like apples? Well, America hasn’t warmed in the last decade-plus.

Here’s the scoop, via RealClearEnergy:

When American climate alarmists claim to have witnessed the effects of global warming, they must be referring to a time beyond 14 years ago. That is because there has been no warming in the United States since at least 2005, according to updated data from the National Oceanic and Atmospheric Administration (NOAA).

The USCRN has eliminated the need to rely on, and adjust the data from, outdated temperature stations. Strikingly, as shown in the graph below, USCRN temperature stations show no warming since 2005 when the network went online. If anything, U.S. temperatures are now slightly cooler than they were 14 years ago.

How will the left attempt to spin this one? Are they the “party of science” or the party of “whatever we say goes?”

Michael Mann, a climatologist at Penn State University, is the creator of the famous (infamous?) “hockey stick graph” that global warming nuts have used to show global temperatures rose during the time period when man began using fossil fuels that were releasing CO2 or Carbon Dioxide into the atmosphere.

When published back in 1998, the graph was featured in Al Gore’s 2006 movie, An Inconvenient Truth.  That movie should have been titled A Series Of Lies To Gain Power And Allow Governments Around the World To Fleece Their Citizens Of Their Hard-Earned Money By Scaring Them Into Paying For An Elaborate Scheme To Save The Planet From Something That Isn’t Even Happening, but they couldn’t get it to fit on the video tape label. 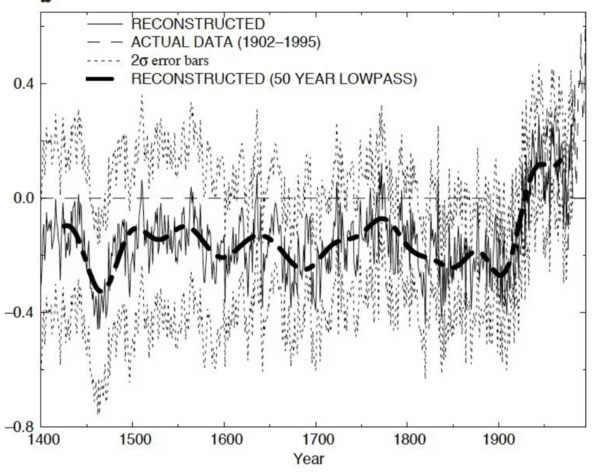 You wouldn’t know this if you get your news from CNN or MSNBC, but the methodology used to come up with the hockey stick graph has always been a problem for real scientists, kinda like me.  I am a Sr. Computer Programmer in another life, some would call that a computer scientist.  What’s that got to do with any of this?

The hockey stick graph was the product of a software program that the Climate Research Unit (CRU) used to get the temperature readings that created the graph.  There’s evidence that the software code was deliberately screwing around with the data to make it appear that temperatures were rising.

The code was written in a software language called IDL, or Iterative Data Language.

Here’s a snippet of code that was in one of the source files for the program called briffa_Sep98_d.pro:

Conservative free speech advocates have been rightly concerned about internet censorship, but the focus of those concerns has been relatively narrow. Conservatives are pushing back against big tech suppression of online critics of globalism, mass immigration, and identity politics. They are pushing back against Big Tech suppression ofpro-Trump commentators. But there is another collection of online voices that quietly and very effectively have been suppressed: climate-change skeptics.

In the past 10 or 15 years, roughly at the same time as identity politics was assuming a dominant position in America’s corporate, academic, and media cultures, climate alarm followed a parallel trajectory. But starting in 2017, when the social media monopolies intensified their online offensive against politically incorrect content, climate skeptic content had already dwindled. It isn’t hard to understand why.

Embracing climate-change politics enriches and empowers the same cast of characters who embrace globalism—corporations, governments, the financial sector, nonprofits, academia, and the useful idiots in media and entertainment.

Meanwhile, the downside of climate change policies is harder to articulate than the downside of globalism. As a result, financial support for scientists and analysts tagged as climate change “deniers” has nearly dried up over the past decade or so. Whoever is left confronts an overwhelming climate alarm apparatus.

Since time immemorial, our climate has been and will always be changing. Patrick Moore explains why “climate change,” far from being a recent human-caused disaster, is, for a myriad of complex reasons, a fact of life on Planet Earth.

That's a lot of changes. And of course, none were caused by humans.

A new scientific study could bust wide open deeply flawed fundamental assumptions underlying controversial climate legislation and initiatives such as the Green New Deal, namely, the degree to which 'climate change' is driven by natural phenomena vs. man-made issues measured as carbon footprint. Scientists in Finland found "practically no anthropogenic [man-made] climate change" after a series of studies.

“During the last hundred years the temperature increased about 0.1°C because of carbon dioxide. The human contribution was about 0.01°C”, the Finnish researchers bluntly state in one among a series of papers.

This has been collaborated by a team at Kobe University in Japan, which has furthered the Finnish researchers' theory: "New evidence suggests that high-energy particles from space known as galactic cosmic rays affect the Earth's climate by increasing cloud cover, causing an 'umbrella effect'," the just published study has found, a summary of which has been released in the journal Science Daily. The findings are hugely significant given this 'umbrella effect' — an entirely natural occurrence — could be the prime driver of climate warming, and not man-made factors. 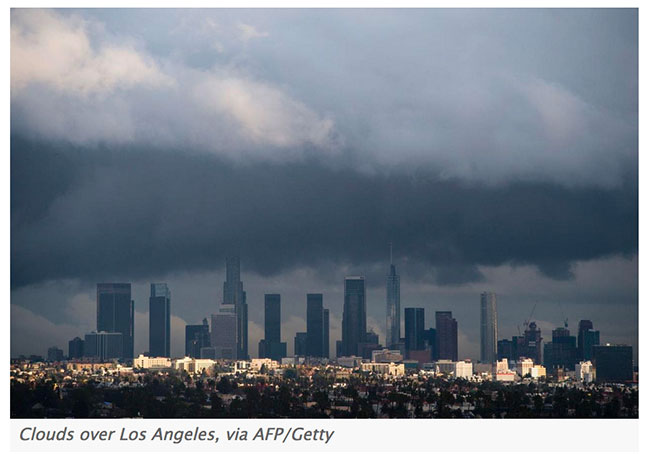 The scientists involved in the study are most concerned with the fact that current climate models driving the political side of debate, most notably the Intergovernmental Panel on Climate Change's (IPCC) climate sensitivity scale, fail to incorporate this crucial and potentially central variable of increased cloud cover.

"The Intergovernmental Panel on Climate Change (IPCC) has discussed the impact of cloud cover on climate in their evaluations, but this phenomenon has never been considered in climate predictions due to the insufficient physical understanding of it," comments Professor Hyodo in Science Daily. "This study provides an opportunity to rethink the impact of clouds on climate. When galactic cosmic rays increase, so do low clouds, and when cosmic rays decrease clouds do as well, so climate warming may be caused by an opposite-umbrella effect."

In their related paper, aptly titled, “No experimental evidence for the significant anthropogenic [man-made] climate change”, the Finnish scientists find that low cloud cover "practically" controls global temperatures but that “only a small part” of the increased carbon dioxide concentration is anthropogenic, or caused by human activity.

The following is a key bombshell section in one of the studies conducted by Finland's Turku University team:

Nils-Axel Morner, a former head of the Paleo-Geophysics and Geodynamics Department in Stockholm, says the notion that CO2 drives climate is an enormous fraud and the fact is a new solar-driven cooling period for the Earth is ‘not far off’.

A leading climatologist is warning that nearly all of the computer simulations at the heart of the predictions of catastrophic, man-made global warming cannot be trusted with respect to a key measure.

At a meeting in the Palace of Westminster in London, Professor John Christy of the University of Alabama in Huntsville told MPs and peers the climate models are way off in their predictions of rapid warming at high altitudes in the tropics.

“They all have rapid warming above 30,000 feet in the tropics – it’s effectively a diagnostic signal of greenhouse warming,” he said. “But in reality it’s just not happening. It’s warming up there, but at only about one third of the rate predicted by the models.”

Christy’s remarks were highlighted by the Global Warming Policy Foundation, a non-partisan think tank in London. The group says that while it is “open-minded on the contested science of global warming,” it is “deeply concerned about the costs and other implications of many of the policies currently being advocated.”

Christy said a similar discrepancy between empirical measurements and computer predictions has been confirmed at the global level.

“The global warming trend for the last 40 years, starting in 1979 when satellite measurements began, is +0.13C per decade or about half of what climate models predicted,” he said.

“An early look at some of the latest generation of climate models reveals they are predicting even faster warming. This is simply not credible,” he said.

Many other scientists have pointed to failed predictions based on the models, noting a “pause” for the past two decades in the rise of average global temperatures.

Scientists who promote the theory of anthropogenic climate change contend a rise in the level of carbon dioxide in the atmosphere due to human activity is causing catastrophic warming.

But a new scientific study found that the current CO2 levels of 410 parts per million were last seen on Earth 3 million years ago. Researchers at the Potsdam Institute for Climate Impact Research concluded that temperatures were up to 7 degrees Fahrenheit warmer globally and sea levels were 65 feet higher.

Meanwhile, the millennial generation in America apparently is taking the climate models to heart. Two-thirds have nothing saved for retirement, and there are indications that the predictions of doom by politicians and many climatologists are to blame.

Steven Crowder does what the media wouldn’t: read the entire Green New Deal from start to finish. It goes about as expected.

Read the full Green New Deal for yourself.

For more on The Green New Deal and Nina Pinta: