We've spent a lot of time of late discussing the inevitable public pension crisis that will eventually wreak havoc on global financial markets.  And while the scale of the public pension underfunding is unprecedented, with estimates ranging from $3 - $8 trillion, there is another taxpayer-funded retirement benefit that has been promised to union workers over the years that puts pensions to shame...at least on a percentage funded basis.

Other Post-Employment Benefits (OPEB), like pensions, are a stream of future payments that have been promised to retirees primarily to cover healthcare costs.  However, unlike pensions, most government entities don't even bother to accrue assets for this massive stream of future costs resulting in $700 billion of liabilities that most taxpayer likely didn't even know existed.

As a study from Pew Charitable Trusts points out today, the average OPEB plan in the U.S. today is only 6.7% funded (and that's if you believe their discount rates...so probably figure about half that amount in reality) and many states around the country are even worse.

States paid a total of $20.8 billion in 2015 for non-pension worker retirement benefits, known as other post-employment benefits (OPEB).  Almost all of this money was spent on retiree health care. The aggregate figure for 2015, the most recent year for which complete data are available, represents an increase of $1.2 billion, or 6 percent, over the previous year. The 2015 payments covered the cost of current-year benefits and in some states included funding to address OPEB liabilities. These liabilities—the cost of benefits, in today’s dollars, to be paid in future years—totaled $692 billion in 2015, a 5 percent increase over 2014.

In 2015, states had $46 billion in assets to meet $692 billion in OPEB liabilities, yielding a funded ratio of 6.7 percent. The total amount of assets was slightly higher than the reported $44 billion in 2014, though the funding ratio did not change. The average state OPEB funded ratio is low because most states pay for retiree health care benefits on a pay-as-you-go basis, appropriating revenue annually to pay retiree health care costs for that year rather than pre-funding liabilities by setting aside assets to cover the state’s share of future retiree health benefit costs.

State OPEB funded ratios vary widely, from less than 1 percent in 19 states to 92 percent in Arizona. As Figure 1 shows, only eight have funded ratios over 30 percent. These states typically follow pre-funding policies spelled out in state law. Many of them also make use of the expertise of staff from the state pension system to invest and manage plan assets. 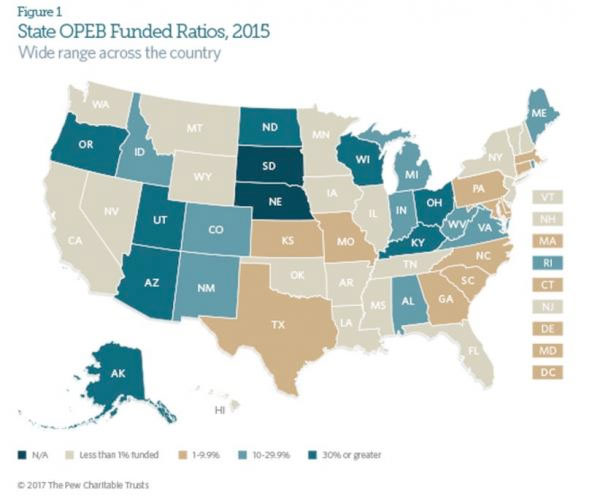 Looking at the problem on a relative basis, you find that several states have accrued net OPEB liabilities totaling in excess of 10% of the personal income generated within their borders.

Pew compared states 2015 OPEB liabilities with 2015 state personal income to show these liabilities in relation to the potential resources that states could draw on to cover the liabilities. The major ratings agencies and other financial research organizations commonly use personal income as a metric to illustrate untapped revenue sources and as an indicator of how flexible states can be in meeting their obligations under changing budget conditions. The research shows significant overall reported OPEB liabilities, but the relative size varies widely. (See Figure 2).

The primary driver for the variation in OPEB liabilities is the difference in how states structure health care benefits for retirees. As a percentage of personal income, the liabilities range from less than 1 percent in 16 states to 16 percent in New Jersey.  Alaska, which has the highest ratio of liabilities to personal income at 42 percent, is a clear outlier among the 50 states because of generous benefit levels that can reach up to 90 percent of premiums for some retired workers. States that provide eligible retirees a monthly contribution equal to a flat percentage of the health insurance coverage premium report the largest liabilities—and could face the greatest fiscal challenges because their costs automatically increase as plan premiums do.

Conversely, those states with fixed-dollar premium subsidies provide a smaller benefit and report lower liabilities. Their exposure to health care cost inflation is also lower, because a fixed-dollar subsidy does not rise with the plan premium.  Lastly, the states that only provide access to a retiree health plan, with no subsidy, have the lowest liabilities as a percentage of personal income.  Although these plans do not make an explicit monthly premium contribution to retirees, many offer retirees a reduced premium through a group rate, which is an implicit subsidy. The Governmental Accounting Standards Board (GASB), the private, independent organization that sets accounting and financial reporting standards for U.S. state and local governments, requires plans to recognize these implicit subsidies in plan financial reporting. 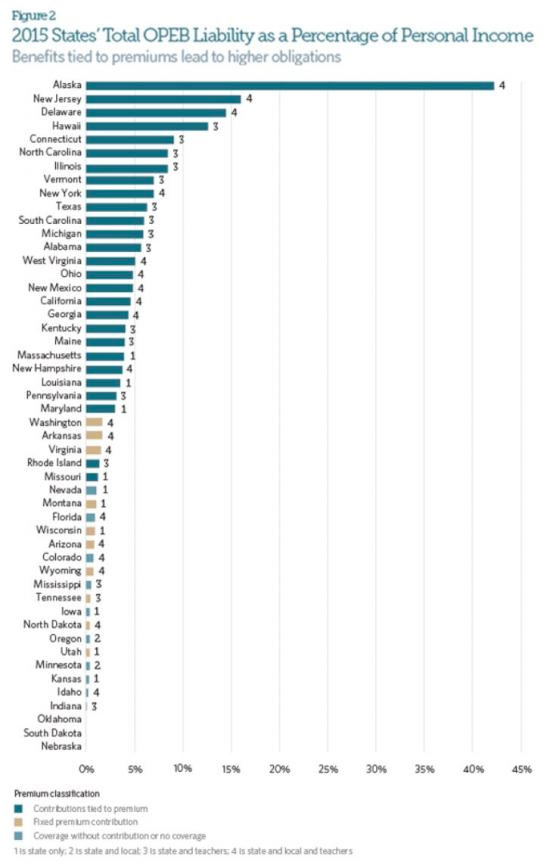 In contrast, a number of states with higher premium contributions—including California and New Jersey—reported significantly greater liabilities beginning in 2014, reflecting increases in assumed future costs.   California’s plan actuary attributed $7.1 billion of the state’s $7.9 billion liability increase to changing demographic assumptions to account for longer retiree life expectancy in that year.New Jersey’s 2014 hike included a 5 percent increase in liabilities caused by changes in its mortality assumptions and a 9 percent jump linked to changes in health care cost assumptions. For states with the largest year-over-year change in OPEB liabilities, changes in assumptions were the largest driver in increasing costs.

But we're sure it's OK, it's not as if there is a massive wave of baby boomers that are about to retire and ask for these benefits to be paid anytime in the near future...

Trackback URL for this entry: https://kickthemallout.com/trackback.php/This_700_Billion_Public_Employee_Ticking_Time_Bomb