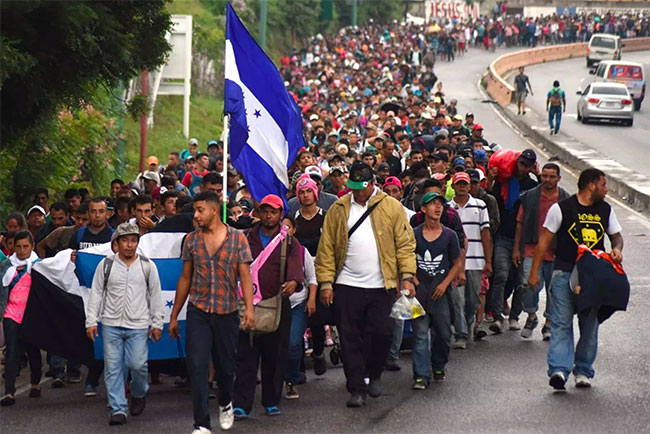 We don’t do wild conspiracy theories here because we figure no matter how ‘creative’ we get we’ll always be outdone by Democrats like Reps. Adam Schiff and Eric Swalwell, two California “Russian collusion” truthers who traffic in such tinfoil hat nonsense.

But radio talk legend Rush Limbaugh, as he so often does, has twice this week brought up a salient point regarding the masses of humanity streaming towards the U.S. border from Central America — the “migrant caravans” that have become a regular occurrence since the latter part of 2018.

During his program Tuesday he noted (per Rush’s website):

We don’t currently have mechanisms to absorb this, and people are now beginning to ask a very legitimate question: Why now? Why are masses of people, in the thousands in these caravans…? Why now are these migrations happening? Why didn’t they happen three years ago and four years ago and five? Why now? Everybody wants everybody to believe that this just organic, that the circumstances in all of these nations in Central America’s deteriorated to the point that nobody can live there anymore.

There may have been others asking this question but it hasn’t become part of the national conservative conversation until Rush asked it.

Some have suggested there are Leftist globalist groups — perhaps funded by some of the usual America-hating suspects like George Soros — behind the massive migrations out of Honduras, Guatemala, and El Salvador.

Others have noted that the Mexican cartels are getting in on the act because there is a lot of money to be made moving that many migrants north, which the cartels have begun to automate, essentially, using buses and other modes of mass transit (see our TNS Videos report on that here).

But this only addresses the “how,” not the why, and that’s where Rush comes in.

He suggested that some sort of “Cloward-Piven” plan could be underway to purposely flood the United States’ capabilities to handle an influx of migrants to the point where the system collapses and widespread chaos ensues — very likely as a means of ‘stopping’ POTUS Donald Trump, the first president in generations that is keeping, or trying to keep, campaign promises, including his pledges to build a border wall and enforce all immigration laws.

Something virtually no one in official Washington or corporate boardrooms wants to see happen.

So, what is the Cloward-Piven plan? And who are/were these people?

The Cloward–Piven strategy is a political scheme outlined in 1966 by American sociologists and political activists Richard Cloward and Frances Fox Piven of Columbia University that called for overloading the U.S. public welfare system in order to precipitate a crisis that would lead to a replacement of the welfare system with a national system of “a guaranteed annual income and thus an end to poverty.”

This was during the time that Lyndon B. Johnson launched his “war on poverty” and he and fellow Democrats gave us the massive welfare bureaucracy we still have today. To a large degree, the Cloward-Piven strategy moved our country closer to the stated objective.

But there’s more to the Cloward-Piven strategy than that, as Rush notes:

As I said yesterday, it’s kind of a derivative of the old Cloward-Piven plan to destroy the United States as founded. You know, the basic element of Cloward-Piven… These were two professors at Columbia University, leftists to be sure.

We’re $22 trillion in debt. But these are the designs of left-wing intellectuals who think this country’s unjust, illegitimate, immoral, and this is one of the ways they came up with to destroy America. And I think we are living in the midst of an international effort. It’s gotta be paid for by somebody. This takes a lot of money, to support this number of human beings on this long a trek. I mean, they don’t get American welfare before they got here. They got getting it somewhere.

Mexico’s not giving them any money that we know of. So we’re way beyond the confines here of simply the trickle in comparison of illegal immigration. This is a mass-migration invasion that is no doubt planned and orchestrated to coincide with a Republican presidential administration.

Rush’s theory of unrest and internal chaos is not actually his theory: It really was the objective of Cloward and Piven. He was just one of the first to put the two together.

As noted by historian Robert E. Weir in 2007, “Although the strategy helped to boost recipient numbers between 1966 and 1975, the revolution its proponents envisioned never transpired.”

The Department of Homeland Security reported that federal agents apprehended around 100,000 people at the U.S.-Mexico border in March alone; the figure for February was near 76,000. Clearly — clearly  — there is a concerted effort to overwhelm our immigration and asylum system, with the objective being to disrupt a president who pledged and is working towards sane border control policies and internal immigration law enforcement.

As to who is behind it, that’s going to come out eventually. But one thing is certain, Democrats in Congress, as well as far too many Republicans, are acting as co-conspirators by their failure to reform current immigration law while giving the president the legal tools he needs to deal with the crisis.

Trackback URL for this entry: http://kickthemallout.com/trackback.php/Rush_Limbaugh_On_Why_Migrant_Invastion_Is_Happening_Now