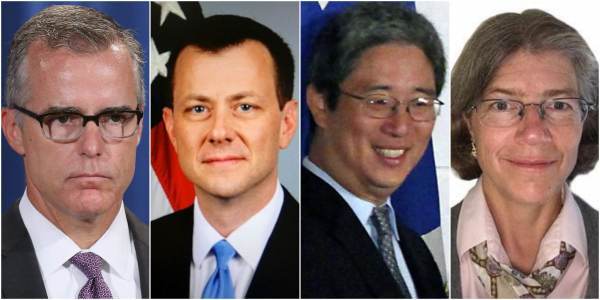 Closing In: A group of House Republicans has been working night and day to expose the Spygate scandal which continues to unfold before our very eyes.

They’ve been thwarted at every turn along the way, but for the past year-and-a-half, they have nevertheless continued to pursue every angle, every clue, and every fact in their attempt to run down all the details of what has become the biggest political scandal in our country’s history. (Related: Sign up for our daily email newsletter and receive our new report “The Spygate Files” for FREE).

We already know many of the names involved — Peter Stzrok, James Comey, John Brennan, James Clapper, Sally Yates, Lisa Page, Andrew McCabe. But one person whose name that has only briefly been mentioned — Bruce Ohr — is about to receive a lot more attention from House Republicans

Hundreds of pages of previously unreported emails and memos provide the clearest evidence yet that a research firm, hired by Hillary Clinton’s campaign and the Democratic National Committee (DNC) to find dirt on and defeat Donald Trump, worked early and often with the FBI, a Department of Justice (DOJ) official and the intelligence community during the 2016 presidential election and the early days of Trump’s presidency.

Fusion GPS’s work and its involvement with several FBI officials have been well reported.

But a close review of these new documents shows just how closely Associate Deputy Attorney General Bruce Ohr, who reported to Obama-era Deputy AG Sally Yates, maintained contact with Fusion — and, in particular, its primary source, former British spy Christopher Steele — before, during and after the election.

Yates was fired by President Trump over an unrelated political dispute. Ohr was demoted recently.

Ohr’s own notes, emails and text messages show he communicated extensively with Steele and with Fusion GPS founder Glenn Simpson. Those documents have been turned over in recent weeks to investigative bodies in Congress and the DOJ, but not reviewed outside the investigative ranks until now.

They show Ohr had contact with Steele in the days just before the FBI opened its Trump-Russia probe in summer 2016, and then engaged Steele as a “confidential human source” (CHS) assisting in that probe.

They also confirm that Ohr later became a critical conduit of continuing information from Steele after the FBI ended the Brit’s role as an informant.

He added, according to The Daily Caller: “When you read these emails, it’s Glenn, it’s Bruce, it’s Nellie, it’s Chris. It’s like these were all best buddies. They were like friends. They were all working together on this project of putting this dossier together that has been disproven.”

Trackback URL for this entry: http://kickthemallout.com/trackback.php/GOP_Lawmakers_Shift_Focus_To_DOJ_Hack_Bruce_Ohr_Over_Previously_Undisclosed_Contact_With_Fusion_GPS