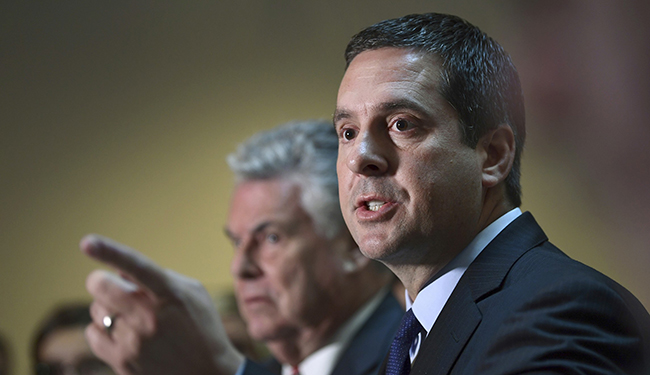 This extreme step is a culmination of the frustration the California Republican explained he's felt in dealing with a Justice Department that had stymied his requests for information, during the panel's government surveillance investigation. In particular the committee has been looking into allegations of Foreign Intelligence Surveillance Act surveillance abuses by the Justice Department and FBI that led to spying on former Trump campaign aide Carter Page.

Two weeks ago, Nunes sent a classified letter to Sessions, which he said was not acknowledged. That was followed by a subpoena last week.

"Then on Thursday we discovered that they are not going to comply with our subpoena," Nunes said on "Fox and Friends Sunday."

A Justice Department official shared the letter sent to Nunes on Thursday with the Washington Examiner, which explained that the decision was made after consulting the White House.

"After careful evaluation and following consultations with the Office of the Director of National Intelligence, the Federal Bureau of Investigation, and the White House, the Department has determined that, consistent with applicable law and longstanding Executive Branch policy, it is not in a position to provide information responsive to your request regarding a specific individual," Assistant Attorney General Stephen Boyd wrote in the letter.

"Disclosure of responsive information to such requests can risk severe consequences, including potential loss of human lives, damage to relationships with valued international partners, compromise of ongoing criminal investigations, and interfere with intelligence activities," Boyd added.

The letter also stated that the DOJ was willing to discuss other ways to accommodate the House Intelligence Committee's oversight inquiry.

But, when asked what he is going to do in response, Nunes said on Sunday "the only thing left to do is we have to move quickly to hold the attorney general of the United States in contempt and that is what I will press for this week."

The chairman didn't disclose what exactly he seeks. He called it "very important" information.

Nunes also said he's not going to take any "excuse" that relates to concerns about national security. "How many times have we heard this argument throughout this investigation?" he asked.

Nunes also conceded that it's possible Sessions personally is not yet aware of his subpoena, which he said he will probably take to court to try and enforce it. Nunes also said he's already spoke to FBI Director Christopher Wray about the matter.

Back in February, Nunes' panel secured the release, without redactions, of a memo which outlined abuses by the FBI and the Justice Department against the Trump campaign, particularly in the write-up and approval of FISA warrant applications to spy on Page.

Soon after, the Democrats on the committee saw the release of their rebuttal memo, albeit with redactions, seeking to add context and push back on some of the assertions the GOP memo made.

More recently, Nunes pressed the DOJ to show the document says prompted the FBI’s investigation into Russian meddling in the 2016 election and possible collusion with the Trump campaign. Nunes, ranking member Adam Schiff, D-Calif., and all members of the committee were provided access to the requested document by the April 11 deadline.

Trackback URL for this entry: https://kickthemallout.com/trackback.php/Devin_Nunes_Wants_To_Hold_Jeff_Sessions_In_Contemp_of_Congress