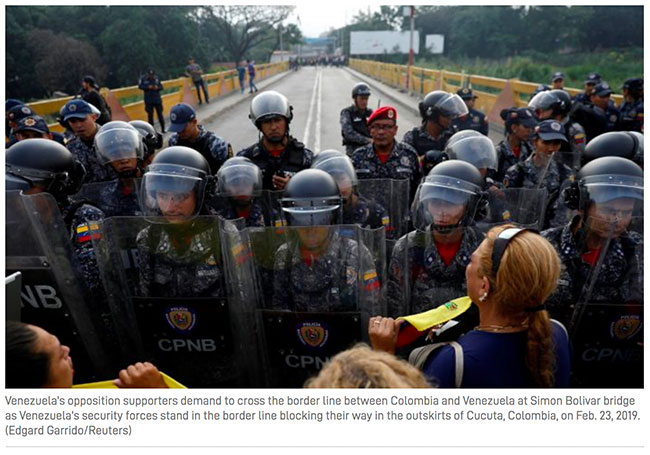 When people talk about socialized health care, free education, and other programs, they often believe these things are meant to care for society.

Supporting socialist policies is often veiled as a consideration for the health and well-being of others. Yet what it replaces is the traditional value of generosity and its complement, gratitude.

In place of the “old values” and “old institutions,” socialism seeks a centralized power with absolute control over society, one that’s empowered to plunder the wealth of select groups of people and trickle down this plunder through a vast state bureaucracy.

Many socialists believe this bureaucratic tyranny should be allowed to direct the basic life choices of each person, including their health, education, finances, property, and even speech.

Socialism is a political system based on tyranny and plunder, since its systems can’t function without threat and use of force.

After all, what happens if people simply refuse to pay for the services forced on them by a socialist state? Well, the socialist tyrants, who ironically advocate against firearms, will send their police force equipped with firearms to compel that person to pay. And if that person still refuses, he or she will be imprisoned.

As French economist and author Frédéric Bastiat wrote in his book “The Law” in 1850: “You would oppose law to socialism. But it is the law that socialism evokes. It aspires to legal, not extralegal plunder.

“It is of the law itself, like monopolists of all kinds that it wants to make an instrument; and when once it has the law on its side, how will you be able to turn against it?”

Bastiat raised the questions of what happens when systems of government that were once formed to prevent plunder then become tools for plunder, and what happens to law when government itself becomes the source of plunder.

Many socialists today view the system with rose-colored glasses, yet are often unaware of the original intentions of socialism.

From the very beginning, socialism was intended as a system of state tyranny. It was what Karl Marx referred to as the “dictatorship of the proletariat” and what Vladimir Lenin called “state capitalism.”

Socialism is a system of totalitarian dictatorship, meant to destroy every level of free will in society, by dictating every part of a person’s life. It’s an ideology of distrust in the ability of the common person to decide for themselves the best course in life, and a belief that state leaders should be given absolute power over each individual.

It was also not about getting rid of “capitalism.” It was specifically about having a massive state bureaucracy seize control of all resources and means of production, and establishing a system that could dominate every facet of society.

Of course, Marx and Engels never intended socialism to be sustainable. They believed it was merely the initial step of establishing communism, where the powers of the state could be used by the “dictatorship of the proletariat” to destroy all values, morality, institutions, and other systems of the past. Eventually, they believed, either the socialist dictatorship would collapse or its leaders would somehow renounce power, leading to the envisioned stage of communism.

Socialism is the ideology of state slavery. It’s a system that places the alleged interests of a collective over the life and free will of an individual, turning people into lifeless shells incapable of self-reliance and indoctrinated with an ideology of struggle.

The generosity of socialists isn’t real generosity. It is, as author William F. Buckley Jr. put it, being “generous with other people’s money.” And the false generosity of socialism is one that can’t exist without the forceful arms of state tyranny. It’s a “generosity” of envy, of discrimination, of plunder that can only emerge from the barrel of a gun.

Joshua Philipp is a senior investigative reporter for The Epoch Times.

Views expressed in this article are the opinions of the author and do not necessarily reflect the views of The Epoch Times.

Our freedoms, our republic, and our constitutional rights have become contested terrain. The Epoch Times, a media committed to truthful, responsible journalism, is a rare bastion of hope and stability in these testing times.

While other media may twist the facts to serve political agendas, we deliver stories while upholding our responsibility to society.

We’ve reported truthfully on the current U.S. administration from the start. We reported on the real possibility of a Trump victory in 2016. We’ve led reporting on the Chinese communist threat since 2000; we have been exposing communist thought in our government, schools, universities, popular culture, and media; and we, like no other media, are rigorously investigating and exposing the unscrupulous agents working to subvert our society.

Stand with us in advancing a truly independent and truthful media—the way a free press was intended to be, as a cornerstone of the Republic. Your contribution allows us to continue piercing through the surface narratives of mainstream media, and provide you with a full picture.

Epoch Times editor-in-chief Jasper Fakkert urges you to support our independent media. We are asking you to help us raise $1 million to support our unique and truthful content.

Every contribution counts, big or small. We sincerely thank you for your continued support and encouragement in these critical times. The Epoch Times is published by The Epoch Times Association, Inc., a 501(c)(3) nonprofit.

The Kick Them All Out Project
https://kickthemallout.com/article.php/You_Cant_Have_Socialism_Without_Tryanny