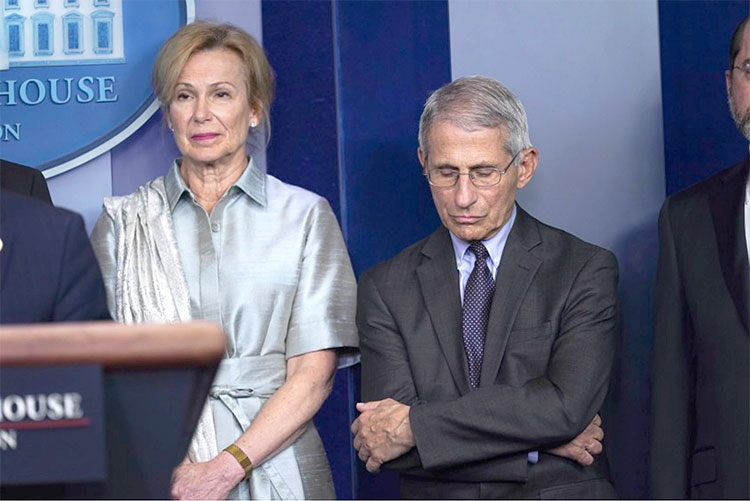 Hydroxychloroquine has been at the center of a protracted political debate since March, when President Trump cited the drug as a promising possible treatment for the novel coronavirus. HCQ has long been used by doctors to treat malaria along with other syndromes such as arthritis and lupus. The World Health Organization lists it as an essential medicine, while nearly five million Americans hold prescriptions for it.

Since Trump's speculative endorsement of the drug, media outlets and medical officials have for several months aggressively promoted various medical trials that have determined the drug has no effectiveness in fighting COVID-19; many commentators have also insisted, in spite of the drug's decades-long safe track record, that it is too dangerous to be used to cure the disease.

Among the drug's critics has been Fauci. In March, the longtime director of the National Institute of Allergy and Infection Diseases dismissed claims of HCQ's effectiveness as "anecdotal" and has periodically voiced that skepticism over the course of the pandemic.

On Tuesday during an interview on "Good Morning America," Fauci further downplayed the drug's purported benefit, claiming that "the overwhelming prevailing clinical trials that have looked at the efficacy of hydroxychloroquine have indicated that it is not effective in [treating] coronavirus disease."

Risch, however, is sharply criticizing Fauci's approach to evaluating the drug's effectiveness, arguing that repeated trials and tests have shown that it is markedly effective at treating COVID-19 so long as it is administered properly.

Risch, a professor of epidemiology and the director of Yale's Molecular Cancer Epidemiology Laboratory, has been pushing for the drug's use in the fight against the coronavirus for months. Last week in a Newsweek op-ed he called HCQ "the key to defeating COVID-19," claiming its use — particularly when administered with one of two antibiotics and the nutritional supplement zinc — has been "shown to be highly effective" in treating high-risk coronavirus patients.

On Tuesday, Risch went further, charging in an interview with Just the News that Fauci is perpetrating a "misinformation campaign" in his opposition to the drug.

Fauci "has been maintaining a studious position that only randomized controlled trial evidence has any value," Risch said, "and everything else he calls anecdotal."

Randomized controlled trials have been referred to as "the gold standard" of clinical research experiments; Fauci last month lamented the "paucity" of such trials regarding COVID-19 cures. But Risch said numerous other types of studies have significant practical value in determining effective courses of medical treatment.

Risch shared a 2017 New England Journal of Medicine article by former Centers for Disease Control and Prevention Director Tom Frieden, one in which the author argued that randomized controlled trials have "substantial limitations" and that "many other data sources can provide valid evidence for clinical and public health action."

Fauci's office did not respond to requests for comment on Risch's claims about the drug's effectiveness and Fauci's assessment of it.

Risch argued that, while hydroxychloroquine is not a universally effective treatment, it has shown marked and repeated success when used in appropriate cases and at appropriate points of disease progression.

"The crucial issues are (a) early treatment of (b) high-risk (c) outpatients with (d) HCQ plus zinc, [azithromycin], doxycycline etc. for (e) hospitalization or mortality outcomes," Risch said. "Dr. Fauci, in citing all of the studies without qualification, smeared all over points (a)-(e)."

Risch said opponents of HCQ have been arguing that the drug "doesn't work on patients near death in ventilators and therefore we can't use it on healthier patients in outpatient settings."

"Why would you even entertain invoking a study on severely sick patients to bear on the efficacy of outpatients?" he asked.

Risch provided Just the News with several studies and reports he said demonstrated the drug's effectiveness. One report out of India earlier this month stated that the drug appeared effective in reducing the virility of the disease, with patients who took larger doses apparently less likely to spread it to close contacts.

One scholarly article published in Travel Medicine and Infectious Disease last month detailed experiments by researchers in Marseille, France, who treated over 3,100 patients with a combination of hydroxychloroquine and azithromycin. That treatment regimen was "associated with a decreased risk of transfer to ICU or death ... decreased risk of hospitalization ≥10 days ... and shorter duration of viral shedding," the researchers wrote.

(That study appeared to use hospitalized patients as trial subjects, but Risch said that the facility functions as both an inpatient ward and a day clinic. "During the study, HCQ was not legal to prescribe for outpatients," he said. "So the hospital admitted patients for the day, did exams etc. and gave them the HCQ prescriptions, then they went home.  Only a small number were actually hospitalized. So in reality they were outpatients.")

Researchers in Brazil, meanwhile, said that patients treated with hydroxychloroquine and azithromycin were less likely to be hospitalized, particularly the earlier the treatment was started. Risch also shared an open letter written in late April by upstate New York doctor Vladimir Zelenko in which the doctor said he had observed "very positive results" by treating patients with hydroxychloroquine, azithromycin and zinc. Of 405 patients treated with that regimen, Zelenko wrote, two died, six were hospitalized, and four were intubated.

In a July 20 academic letter, Risch ultimately cited a total of 12 studies he said showed a positive association with HCQ use and improved mortality outcomes, including one trial in New York City concluding that "hydroxychloroquine use was associated with decreased in-hospital mortality."

Risch said that the practice of treating sicker patients with the drug "favors a poorer outcome for the medication."

"The evidence is when you limit studies to just the five conditions outlined in my first email, [the drug] shows benefits in those strict conditions," Risch said.

RCTs have indicated the drug is not effective at COVID-19

Numerous randomized controlled trials have indeed suggested that hydroxychloroquine has little to no effect in treating coronavirus.

One such study, the results of which were published last month, utilized a "randomized, double-blind, placebo-controlled trial across the United States and parts of Canada" testing whether or not the drug could work as "postexposure prophylaxis." Though "no serious adverse reactions were reported" by those taking the drug, hydroxychloroquine "did not prevent illness compatible with Covid-19 or confirmed infection" when used in that manner.

Those conclusions would seem to dispute Risch's claims that the drug is most effective at counteracting COVID-19 when used early, though the researchers themselves acknowledged the significant limitations of their own study: Just 18% of those classified as COVID patients in the study actually confirmed that diagnosis with a laboratory test. "Given the small number of PCR tests," the researchers state at one point, "it remains theoretically possible that hydroxychloroquine therapy limits proven infection."

Two other randomized controlled studies, one published in the medical journal BMJ in May and one conducted by the U.K.'s Nuffield Health System concluded that hydroxychloroquine use "did not result in a significantly higher probability of negative conversion than standard of care alone" and that there was "no beneficial effect of hydroxychloroquine" in the studied patient populations.

Notably, both of those studies utilized patients who had been hospitalized for COVID-19 rather than those at the earlier stages of the disease; according to Risch, the drug is less effective under those conditions and should be given at the earliest point possible in the disease's progression, outside of a hospital setting.

"All we want is to show benefit under those conditions," Risch told Just the News. "We don't need to use this medication in the hospital because the whole point is to keep patients out of the hospital."

Trackback URL for this entry: https://kickthemallout.com/trackback.php/Yale_Epidemiologist-Dr_Fauci_Running_Misinformation_Campaign_Against_Hydroxychloroquine