Editor's Note:  Funny, once they stole the election from Trump, suddenly things like this are happening all over the place.  The WHO had DELIBERATELY instructed everyone to use very high cycles on PCR test in order to produce mostly false-positive results, to create the perception of an out-of-control pandemic.   They know damned well they have been LYING to us all from the very start!  The PCR test is NOT A DIAGNOSTIC TEST!  It is a process developed to manufactures samples for clinical research.  It CANNOT detect viral infections.  They have been improperly using the PCR process to control the perception that a pandemic is occurring and then used to manufacture the perception that their dangerous vaccines are being successful.   Increase the cycles used, you create "more cases."  Decrease the cycles and you create the perception of "fewer cases" which makes everyone think it's because of the wonderful vaccines.  THEY ALL KNOW ANYTHING OVER 35 CYCLES WILL CREATE MOSTLY FALSE POSITIVES, which is why they have been instructing to use 40 cycles or more!  Fauci admitted this recently.  Watch the video here. 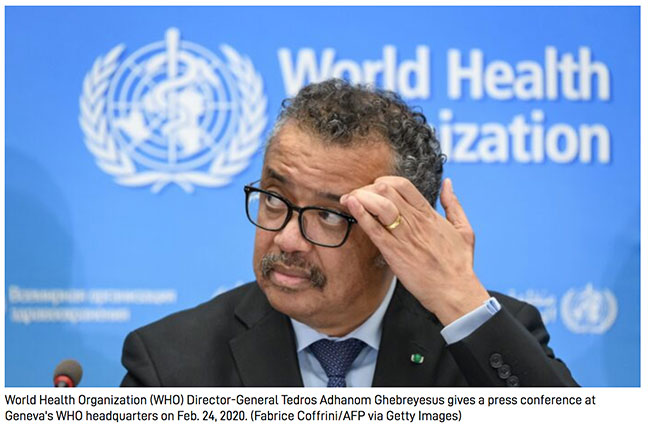 The World Health Organization (WHO) has cautioned experts not to rely solely on the results of a PCR test to detect the CCP virus.

In updated guidance published on Jan. 20, the WHO said that lab experts and health care practitioners should also consider the patient’s history and epidemiological risk factors alongside the PCR test in diagnosing the CCP (Chinese Communist Party) virus.

The new guidance could result in significantly fewer daily cases.

“Most PCR assays are indicated as an aid for diagnosis, therefore, health care providers must consider any result in combination with timing of sampling, specimen type, assay specifics, clinical observations, patient history, confirmed status of any contacts, and epidemiological information,” the guidance says.

It’s unclear why the health agency waited over a year to release the new directive. The WHO didn’t reply to an inquiry from The Epoch Times.

Scientists and physicians have raised concerns for many months of an over-reliance on and a misuse of the PCR test as a diagnostic tool since it can’t differentiate between a live infectious virus from an inactivated virus fragment that is not infectious.

The WHO did not specify what the threshold value cutoff should be for a positive diagnosis, but said to only “determine if [a] manual adjustment of the PCR positivity threshold is recommended by the manufacturer.” 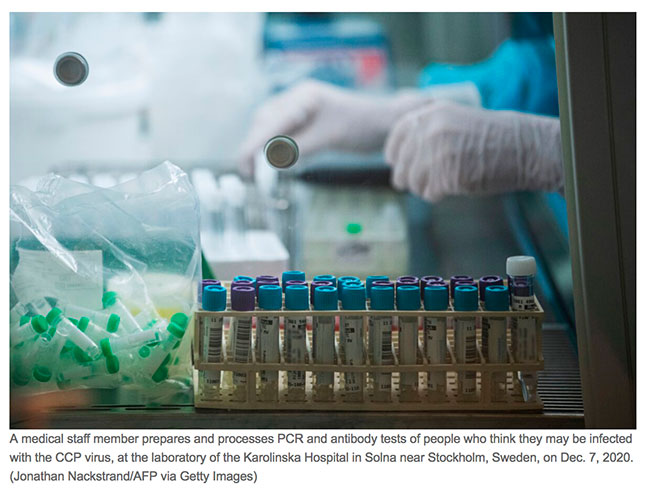 However, it clarified that when the prevalence of the CCP virus is low, “the risk of false positive increases” meaning that “the probability that a person who has a positive result (SARS-CoV-2 detected) is truly infected with SARS-CoV-2 decreases as prevalence decreases, irrespective of the claimed specificity [of the PCR test].”

SARS-CoV-2 is the scientific name for the CCP virus that causes the disease COVID-19.

The Centers for Disease Control and Prevention (CDC) says its PCR tests have a cycle threshold cutoff of 40 cycles. The federal agency finally included information on cycle threshold value in its Frequently Asked Questions about COVID-19 for laboratories on Nov. 12, 2020.

But many medical experts consider a threshold value cutoff of 40 cycles to only return false positives since samples that go through many amplification cycles will pick up negligible RNA sequences regardless if the virus is inactivate or the viral load is exceedingly low to pose any problem.

Prior to the CCP virus pandemic, for individuals to be considered a case, they must test positive and show clinical signs and symptoms. But to be counted as a CCP virus case, only a positive PCR test is required. And no matter how many times an individual is tested, each positive test is counted as a separate case.

The WHO is now advising that a positive PCR test that does “not correspond with the clinical presentation” should be verified by taking “a new specimen” and retesting it.

This advice may also help lower CCP virus cases in hospitals as it more clearly defines who is considered a hospitalized case.

The UK’s National Health Service (NHS) Director of International Relations Dr. Layla McCay confirmed to talkRADIO that a percentage of hospitalized patients officially counted as positive cases were actually being treated for different illnesses not related to COVID-19. They had only tested positive for the disease at the hospital without displaying any symptoms.

Dr Layla McCay, NHS Confederation director, confirms to Julia that the hospital figures for “Covid patients” include patients who are not being treated for Covid but have simply tested positive while being treated for something else.@JuliaHB1 | @LaylaMcCay pic.twitter.com/xSud6LW13M

“It is correct that in hospital, people who tested positive for COVID will be the full range of symptoms,” McCay said. “Some will have it as an aside to some other problem for which they’re in the hospital.”

The day after the WHO released its new guidance, Chief Medical Adviser to President Joe Biden, Dr. Anthony Fauci, said the United States would rejoin the organization.

“As such, I am honored to announce that the United States will remain a member of the World Health Organization,” Fauci said. “Yesterday, President Biden signed letters retracting the previous administration’s announcement to withdraw from the organization, and those letters have been transmitted to the secretary-general of the United Nations and to you Dr. Tedros, my dear friend.”

Tedros Adhanom Ghebreyesus is the director-general of the WHO.

“The United States also intends to fulfill its financial obligations to the organizations,” Fauci added.

In July last year, the Trump administration pulled out of the WHO over its alleged role in helping the Chinese communist regime cover up the severity of the CCP virus.

There have been mixed responses from Congress over Biden’s decision to rejoin the WHO.

Rep. Lauren Boebert (R-Colo.) introduced a bill (pdf) on Jan. 21 to “prohibit the availability of United States contributions to the World Health Organization until Congress receives a full report on China and the COVID-19 pandemic, and for other purposes.”

She said in a statement: “The WHO is China-centric and panders to Beijing at every turn. There is no reason U.S. taxpayers should contribute more than $400 million annually to an organization that covered for China and failed to contain the spread of the COVID-19 pandemic.”

Prior to former President Donald Trump withdrawing from the WHO, the United States contributed the most money to the health agency, according to State Department statistics.

Trackback URL for this entry: https://kickthemallout.com/trackback.php/WHO_Changes_CCP_Virus_Test_Criteria_in_Attempt_To_Reduce_False_Positives