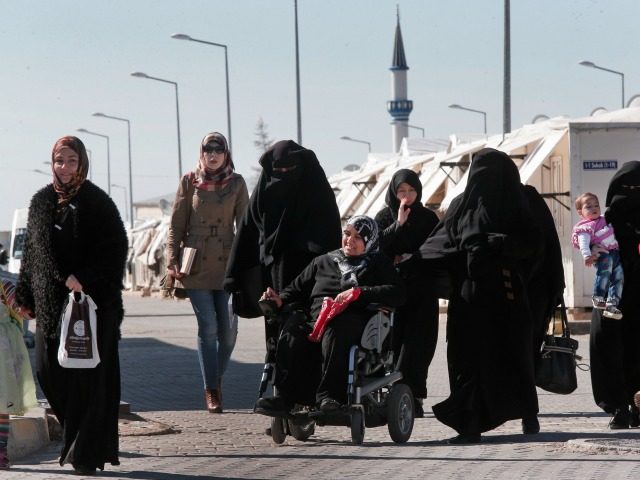 Trump signed the order on refugees while at the Pentagon, minutes after General James Mattis was sworn in as Secretary of Defense by Vice President Mike Pence at a brief ceremony which the president attended.

The executive order, “Protecting the Nation from Terrorist Attacks by Foreign Nationals,” contained these key elements:

In the three months and twenty-seven days since Fiscal Year 2017 began on October 1, 2016, 32,125 refugees have entered the United State

The executive order did however, allow the Secretaries of State and Homeland Security the discretion, on a case by case basis, “to process . . . those refugee claims made by individuals on the basis of religious-based persecution, provided that the religion of the individual is a minority religion in the individual’s country of nationality,”

The number of refugees granted religious-persecution waivers during the 120 suspension period is likely to be minimal.

Upon the possible resumption of the federal refugee resettlement program on May 27, 120 days from Friday, four months will remain in FY 2017. Slightly more than 4,000 refugees per month, in total 17,875 refugees, would be allowed to enter the United States during the remaining time of FY 2017.

The order also directed “the Secretary of State, in conjunction with the Secretary of Homeland Security and in consultation with the Director of National Intelligence [to] review the USRAP application and adjudication process to determine what additional procedures should be taken to ensure that those approved for refugee admission do not pose a threat to the security and welfare of the United States, and shall implement such additional procedures,” during the 120 day suspension period.

Refugee applicants currently in the pipeline “may be admitted upon the initiation and completion of these revised procedures,” the executive order stated.

In the order, President Trump also “proclaim[ed] that the entry of nationals of Syria as refugees is detrimental to the interests of the United States and thus suspend any such entry until such time as I have determined that sufficient changes have been made to the USRAP to ensure that admission of Syrian refugees is consistent with the national interest.”

The Department of Homeland Security on Wednesday announced the suspension of the processing of any refugees overseas currently under consideration for acceptance to the program.

The executive order also included a temporary block on visas for 90 days for “immigrants and non-immigrants” from Syria, Somalia, Sudan, Libya, Yemen, Iran, and Iraq, and specifically directed the Secretary of State to “request all foreign governments that do not supply such information [regarding refugee vetting] to start providing such information regarding their nationals within 60 days of notification.”:

After the 60-day period . . . expires, the Secretary of Homeland Security, in consultation with the Secretary of State, shall submit to the President a list of countries recommended for inclusion on a Presidential proclamation that would prohibit the entry of foreign nationals (excluding those foreign nationals traveling on diplomatic visas, North Atlantic Treaty Organization visas, C-2 visas for travel to the United Nations, and G-1, G-2, G-3, and G-4 visas) from countries that do not provide the information requested pursuant to subsection (d) of this section until compliance occurs.

Signing the “Protecting the Nation from Foreign Terrorist Entry Into the United States” executive order was one of two executive actions taken by President Trump immediately after he congratulated Mattis.

The other action was the signing of a presidential memorandum, whose purpose, the president said, is  “to begin a great rebuilding of the armed services of the United States, developing a plan for new planes, new ships, new resources and new tools for our men and women in uniform.”

“We don’t want them here,” Trump said of terrorists.

“We want to ensure that we are not admitting into our country the very threats our soldiers are fighting overseas,” he said, adding:

We only want to admit those into our country who will support our country and love deeply our people. We will never forget the lessons of 9-11, nor the heroes who have lost their lives at the Pentagon. They were the best of us. We will honor them not only with our words, but with our actions. And that’s what we’re doing today. I am privileged to be here with you, and I promise that our administration will always have your back. We will always be with you.

“Both forms of presidential action have the force of law on the executive branch, and sometimes they seem to be used interchangeably,” USA Today reported on the difference between an executive order and a presidential memorandum:

Executive orders are required by law to be published in the Federal Register, which is sort of the executive counterpart to the Congressional Record. Presidential memoranda may be published or not, depending on the subject. . . .

In 2014, fed up with Obama’s executive orders, Congress required the White House Office of Management and Budget to begin reporting on the cost of executive orders. But Congress neglected to include presidential memoranda, and included them the next year — but only for a memorandum with an estimated regulatory cost of $100 million or more.

‘Extreme vetting’ is just a euphemism for discrimination against Muslims. Identifying specific countries with Muslim majorities and carving out exceptions for minority religions flies in the face of the constitutional principle that bans the government from either favoring or discriminating against particular religions. Any effort to discriminate against Muslims and favor other religions runs afoul of the First Amendment.

“Refugees are our coworkers, neighbors, friends, business owners, and community leaders. Regardless of where they come from – whether as a refugee or as an undocumented young person – everyone deserves to live with dignity, protected from harm,” Joshua Hoyt, the executive director of the NPNA said. “We oppose Trump’s unjust, un-American, and discriminatory steps to disgrace our history, beliefs, and values,” Hoyt added.

Trackback URL for this entry: http://kickthemallout.com/trackback.php/Trump_Halts_All_Refugees

Monday, April 10 2017 @ 06:07 PM MDT
he must halt all immigration period to get around the courts and give us here in the USA a break from this excessive spending on non producers
Please Support Us With A Purchase