The only "direct power" we have over the people we elect is the power to HIRE and FIRE them at will.

It's amazing how many people agree with Mark Twain.  Congress rarely rises above an approval rating of 20% yet 80% or more of our representatives keep winning reelection.  What's wrong with this picture?  We all know what needs to be done so why don't we do it?  Why can't we seem to do it?

It's simple.  We rely on the people responsible for systemic corrution in our government to control and corrupt our elections as well.  The way our elections are run virtually guarantees anyone who plays ball with the powers-that-be will win reelection.


So the question facing us now is how do we kick them all out using a system that is rigged to prevent us from kicking them all out? 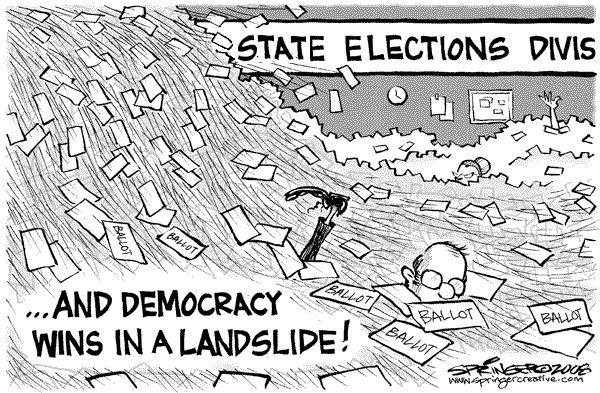 Not even vote tampering can stop a landslide election.

The people who control our elections try their very best to create races that are very close so they can more easily tamper with results if they have to.  If the race is close, hardly anyone will dispute the results.

If the vast majority of people in your area decides to vote someone out of office there's nothing that person can do to stop it from happening.  If there is a landslide election against an incumbent not even vote tampering can prevent it.  They would have to throw so many votes it would be obvious the elections was totally rigged and corrupt.  Voting someone out in a highly publicized landslide election is the most direct means to make the will of the people a reality.

It's Time for us to use the most powerful direct weapon we have to our best advantage  . . . the power to Hire and Fire with landslide elections to vote every incumbent we can out of office! 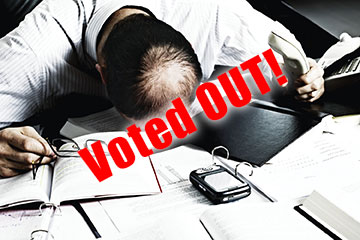 We have to wise up and realize the only way we can stop the systemic corruption surrounding us is to draw a clean line in the sand.  We must send a clear message to everyone that we are not going to put up with it anymore.

The message we need to send is "everyone in Congress is equally responsible."  Even the so-called good guys that we reelect over and over and over again.

It's time to realize, WE ARE THE PROBLEM.  Why do we keep doing this?

How many times have you heard people say, "We the people are supposed to be in charge?"  Well, we have SUCKED as employers.  We have not done what we need to do to reign in the corruption of our employees.  And we no longer have the luxury of time.  If we don't wise up, sober up, and do what needs to be done, we are doomed.

An employer that doesn't fire employees that are betraying him/her at every turn and in fact working for the competition deserves exactly what they get!  We are in the dire situation we're in because we have been asleep at the wheel.

TIME TO WAKE UP AND DO WHAT NEEDS TO BE DONE BEFORE IT'S TOO LATE!  We must use our next election to hold the entire Congress accountable!  We must draw a line in the sand, send a LOUD MESSAGE that every member of Congress is responsible for the systemic corruption that grips our nation.  It's time to CLEAN HOUSE!

Trackback URL for this entry: https://kickthemallout.com/trackback.php/To_Kick_Them_Out_Vote_Them_Out