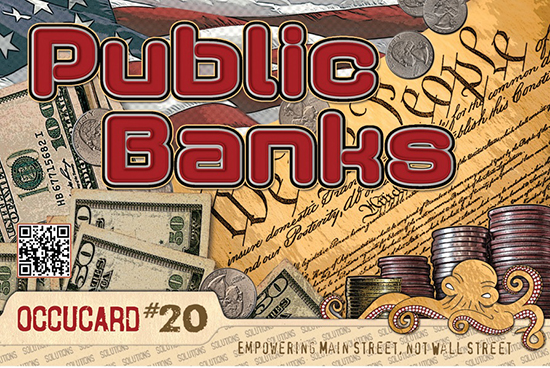 The Web of Debt Blog

Phil Murphy, a former banker with a double-digit lead in New Jersey’s race for governor, has made a state-owned bank a centerpiece of his platform. If he wins on November 7, the nation’s second state-owned bank in a century could follow.

A UK study published on October 27, 2017 reported that the majority of politicians do not know where money comes from. According to City A.M. (London) :

More than three-quarters of the MPs surveyed incorrectly believed that only the government has the ability to create new money. . . .

The Bank of England has previously intervened to point out that most money in the UK begins as a bank loan. In a 2014 article the Bank pointed out that “whenever a bank makes a loan, it simultaneously creates a matching deposit in the borrower’s bank account, thereby creating new money.”

The Bank of England researchers said that 97% of the UK money supply is created in this way. In the US, the figure is about 95%. City A.M. quoted Fran Boait, executive director of the advocacy group Positive Money, who observed:

“Despite their confidence in telling the public that there is ‘no magic money tree’ to pay for vital services, politicians themselves are shockingly ignorant of where money actually comes from.

“There is in fact a ‘magic money tree’, but it’s in the hands of commercial banks, such as Barclays, HSBC and RBS, who create money whenever they make loans.”

For those few politicians who are aware of the banks’ magic money tree, the axiom that the people should own the banks – or at least some of them – is a no-brainer. One of these rare politicians is Phil Murphy, who has a double-digit lead in New Jersey’s race for governor. Formerly a Wall Street banker himself, Murphy knows how banking works. That helps explain why he has boldly made a state-owned bank a centerpiece of his platform. He maintains that New Jersey’s billions in tax dollars should be kept in the state’s own bank, where it can leverage its capital to fund local infrastructure, small businesses, affordable housing, student loans, and other state needs. New Jersey voters go to the polls on November 7.

That means New Jersey could soon have the second publicly-owned depository bank in the country, following the very successful century-old Bank of North Dakota (BND). Other likely contenders among about twenty public banking initiatives now underway include Washington State, which has approved a feasibility study for a state bank; and the cities of Santa Fe in New Mexico and Los Angeles and Oakland in California, which are exploring the feasibility of their own city-owned banks.

A Bank Is Not Simply an Intermediary

An article in City Watch LA critical of the idea of a city-owned bank observed that Los Angeles formerly had a bank that failed, closing its doors in 2003 due to insolvency. The argument illustrates the confusion over what a bank is and what it can do for the local government and local communities. The Los Angeles Community Development Bank was not a bank. It was a loan fund, and it was designed to fail. It was not chartered to take deposits or to create deposits as loans, and it was only allowed to lend to businesses that had been turned down by other banks; in other words, they were bad credit risks.

With a loan fund, a dollar invested is a dollar lent, which must return to the bank before it can be lent again. By contrast, as the Bank of England acknowledged in its 2014 paper, “banks do not act simply as intermediaries, lending out deposits that savers place with them.” A chartered depository bank can turn one dollar of capital into ten dollars in bank credit, something it does simply by creating a deposit in the account of the borrower. If the bank’s books don’t balance at the end of the day, it borrows very cheaply from other banks, the Federal Home Loan Banks, or the repo market. It borrows at bankers’ rates rather than retail rates, and that is one of the many perks that a publicly-owned bank can recapture for local governments. Borrowing from banks rather than the bond market actually expands the circulating money supply, stimulating the local economy.

Public sector banks, while rare in the US, are common in other countries; and recent studies have shown that they are actually more profitable, safer, less corrupt, and more accountable overall than private banks.

This is particularly true of the Bank of North Dakota, currently the only publicly-owned depository bank in the US. According to the Wall Street Journal, it is more profitable than Goldman Sachs or JPMorgan Chase. The BND is risk-averse, lends conservatively, does not gamble in derivatives or put deposits at risk. It is able to lend at lower than market rates because its costs are very low.

The BND holds all of its home state’s revenues as deposits by law, acting as a sort of “mini-Fed” for North Dakota. It has seen record profits for almost 15 years. It continued to report record profits after two years of oil bust in the state, showing that it is highly profitable on its own merits because of its business model. It does not pay bonuses, fees, or commissions; has no high paid executives; does not have multiple branches; does not need to advertise; and does not have private shareholders seeking short-term profits. The profits return to the bank, which either distributes them as dividends to the state or uses them to build up its capital base in order to expand its loan portfolio.

The BND does not compete but partners with local banks, which act as the front office dealing with customers. It does make loans that community banks are unable to service, but this is not because the borrowers are bad credit risks. It is because either the loans are too big for the smaller banks to handle by themselves or the smaller banks cannot afford the regulatory burden of lending in rural communities where they get only a few loans a year.

Among other cost savings, the BND is able to make 2% loans to North Dakota communities for local infrastructure — half or less the rate paid by local governments in other states. The BND also lends to state agencies. For example, in 2016 it extended a $200,000 letter of credit to the State Water Commission at 1.75% and a $56,000 loan to the Water Commission to pay off its bond issues. Since 50% of the cost of infrastructure is financing, the state can cut infrastructure costs nearly in half by financing through its own bank, which can return the interest to the state.

If Phil Murphy wins the New Jersey governorship and succeeds in establishing a New Jersey state-owned bank, expect a wave of public banks to follow, as more and more elected officials come to understand how banking works and to see the obvious benefits of establishing their own.

Ellen Brown is an attorney, founder of the Public Banking Institute, a Senior Fellow of the Democracy Collaborative, and author of twelve books including Web of Debt and The Public Bank Solution. A thirteenth book titled The Coming Revolution in Banking is due out this winter. She also co-hosts a radio program on PRN.FM called “It’s Our Money.” Her 300+ blog articles are posted at EllenBrown.com.

Trackback URL for this entry: http://kickthemallout.com/trackback.php/The_Public_Bank_Option-Safer_Local_And_Half_The_Cost