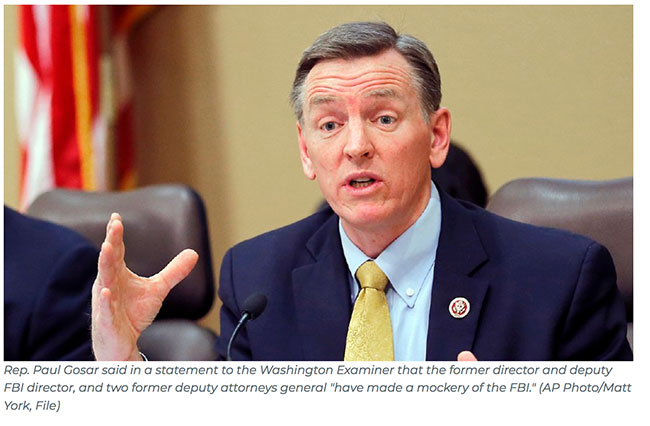 Rep. Paul Gosar, R-Ariz., called for the criminal prosecution of multiple former FBI and Justice Department officials after the release Friday of the Republican memo about surveillance of a Trump campaign adviser.

"I will be leading a letter to the Attorney General seeking criminal prosecution against these traitors to our nation," Gosar said in a statement. 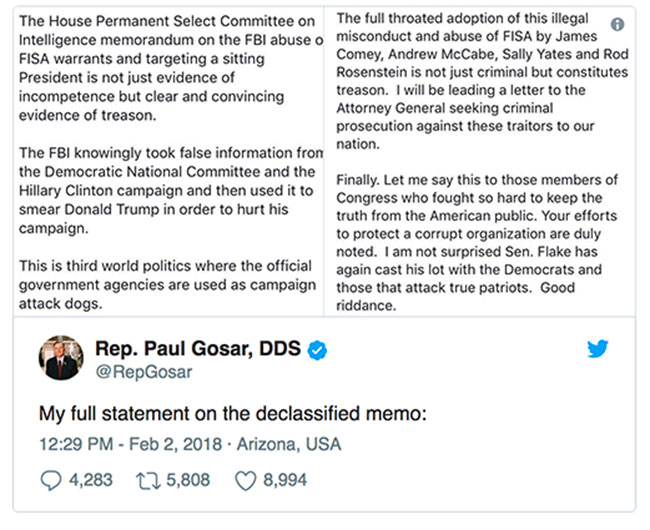 The House Intelligence Committee released the memo on Friday after voting to declassify it. President Trump approved the release, which he had the power to block.

The memo was compiled by House Intelligence Committee Chairman Devin Nunes, R-Calif., and other Republican lawmakers, and explains how FBI and DOJ officials depended on information from a dossier compiled by former British intelligence officer Christopher Steele to obtain and renew a warrant to surveil former Trump campaign adviser Carter Page.

Gosar said in a statement to the Washington Examiner that the former director and deputy FBI director, and two former deputy attorneys general "have made a mockery of the FBI."

"This is precisely why I voted no on the FISA Reauthorization," Gosar added.

Congressional Republicans are saying the memo proves the anti-Trump bias of the Justice Department during their investigation into Russian election meddling. Democrats say the memo is missing important context, gets certain details wrong and otherwise paints a misleading picture of the investigation.

Kick Them All Out Project
http://kickthemallout.com/article.php/Rep_Paul_Gosar_Calls_For_Criminal_Prosecution_of_Former_Top_FBI_DOJ_Officials_After_Release_of_Nunes_Memo