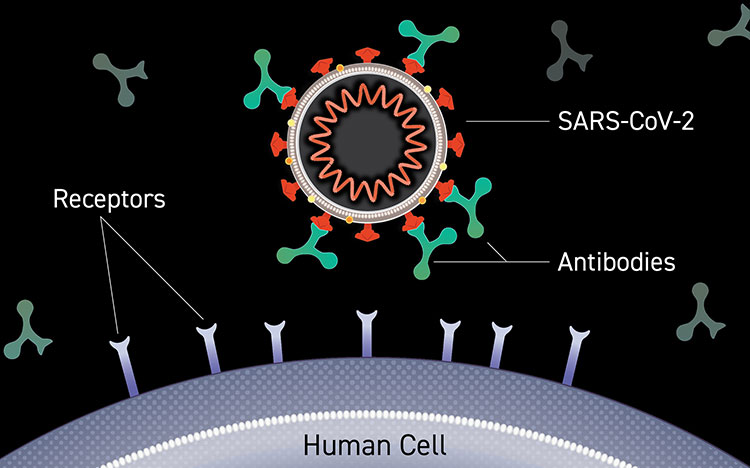 You've probably heard about monoclonal antibodies—a therapeutic treatment that has been highly successful at treating COVID-19. Florida Gov. Ron DeSantis, for instance, aggressively championed the procedure in his state, which saw such promising results that even Dr. Anthony Fauci came out strongly in support of it.

Now, however, the Biden administration is announcing that it will begin rationing the treatment throughout the U.S., citing an alleged fear of shortages:

An HHS spokesperson said seven states have accounted for 70% of orders for the therapy. Those seven states are Florida, Texas, Mississippi, Tennessee, Alabama, Georgia and Louisiana.

"Given this reality, we must work to ensure our supply of these life-saving therapies remains available for all states and territories, not just some," the HHS spokesperson said.

The distribution, which is similar to a system employed earlier this year, will fall to HHS, which will allocate product to states and territories each week, rather administration sites ordering them directly.

But is the threat of shortages real? Texas Montgomery County Judge Mark Keough wrote on Facebook this week that there was, in fact, no looming shortfall of the drug: 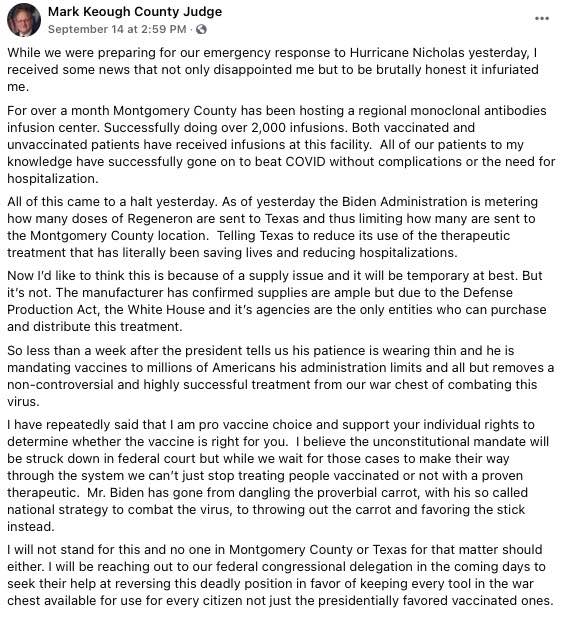 As of yesterday the Biden Administration is metering how many doses of Regeneron are sent to Texas and thus limiting how many are sent to the Montgomery County location. Telling Texas to reduce its use of the therapeutic treatment that has literally been saving lives and reducing hospitalizations.

Now I'd like to think this is because of a supply issue and it will be temporary at best. But it's not. The manufacturer has confirmed supplies are ample but due to the Defense Production Act, the White House and it's agencies are the only entities who can purchase and distribute this treatment.

So less than a week after the president tells us his patience is wearing thin and he is mandating vaccines to millions of Americans his administration limits and all but removes a non-controversial and highly successful treatment from our war chest of combating this virus.

A spokesman for the U.S. Department of Health and Human Services told CNN that the department "will determine the amount of product each state and territory receives on a weekly basis."

Trackback URL for this entry: https://kickthemallout.com/trackback.php/Red_States_Are_Having_Big_Success_Treating_COVID_with_Monoclonal_Antibodies