Call To All Americans that are SICK TO DEATH
of all the corruption infesting our government,
to participate in the Fire Congress "Pink Slip Mail-in Campaign." 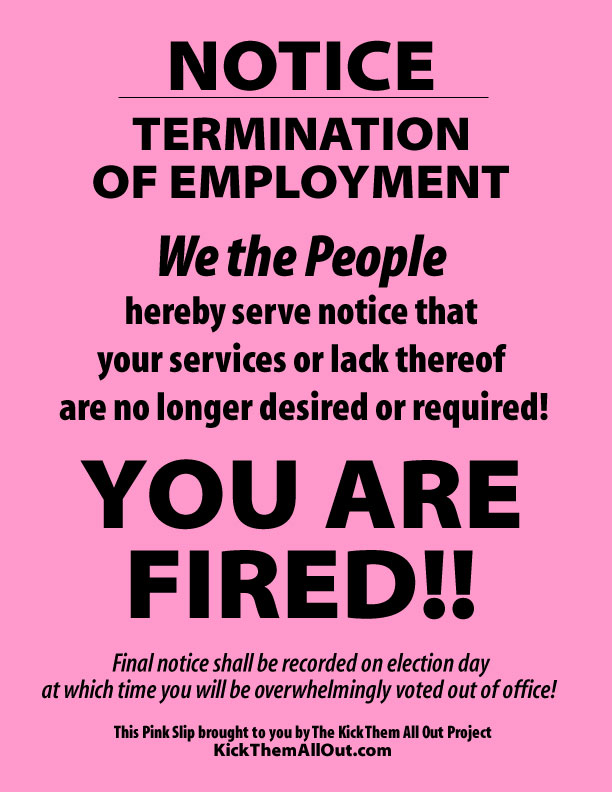 Click on image above or this link to
download a PDF copy to print out on bright pink paper.

No matter what you do to voice your displeasure with what our so-called representatives in government are doing, it's only as effective as the consequences our representatives suffer for not doing what we've hired them to do . . . represent US.  For example, you can write them, fax them, camp outside their offices but the sad fact is your representatives are only wondering one thing . . . "OR WHAT?  What are you going to do to me if I don't do what you want?"

The reason we are never taken seriously, the reason we are always ignored is simply because there are no real consequences for ignoring us.  There is no criminal penalty for violating their oath of office.  So we need to remind everyone exactly what the consequence are for violating our trust and the oath of office.  WE HAVE TO MAKE SURE THEY KNOW EXACTLY WHAT WE ARE "REALLY" GOING TO DO.  WE HAVE TO TELL EACH AND EVERY ONE OF THEM WE ARE GOING TO VOTE YOU OUT OF OFFICE YOU BASTARD!  That's OR WHAT!   And we actually have to follow through with it!

The powers-that-be know full well that the likelihood of us forming the united front required to vote them out of office is about as likely as the Central Bankers forgiving all the debt they've enslaved humanity under and declaring a Jubilee.  The powers-that-be are totally convinced they have socially conditioned us to such a degree that they believe we are literally incapable uniting over anything.  And even if we start to, they know they can fractionalize us and destroy our focus with a snap of their fingers by throwing out a few political footballs.  We fall for their tricks every single time.

Until we prove them wrong, until we prove we can stop bickering and fighting over whatever they determine will best stir the pot, and wake up to the false left/right paradigm nonsense, they will be absolutely right.  They have no reason to fear us.  Until we REALLY vote the bastards out of office EN MASS, we will never be taken seriously, we will never be paid attention to and our yelling and complaining is backed by nothing more than a hollow, pathetic threat to hold them accountable at the polls.

SO, we're proposing a new tactic be added to the mix.  It's time for the American people to make it very clear what's in store for our current representatives for a change with Operation Pink Slip.  Everyone who loves this country needs to download this Pink Slip, print out a bunch of them on bright pink paper, give them to all your friends and family and everyone must mail them into their Representatives and Senators. We need to flood Congress with PINK SLIPS.  We need to bury them in them!

Our so-called representatives are masters at keeping us freaking out all the time.  Don't you think it's time to put the pressure on them, to freak THEM out for a change?  Wouldn't it be great to make them feel insecure from now through November, knowing we mean business this time and the jig is up!?

You don't even need to include your return address if you don't want to.  You can send them totally anonymously.  The main idea is to flood Congress with them.

And we ask that you send copies to all your local media outlets too, to let them know this is happening, so they can't ignore it like they ignore everything else.

THEN WE ACTUALLY DO IT IN THE UPCOMING ELECTION!  Until we actually follow through with the threat, on a scale that will actually be felt, we will NEVER be taken seriously and we will never have any say over anything of consequence.  If we do this just once, the whole political landscape will change for the better.  The balance of power will shift back to our side of the equation for a change.

NOTE:  Some people have mentioned that the Capital no longer opens mail because of the anthrax issue.  I called and they do in fact open mail.  They simply screen "ALL" mail now before it gets to Congress, so it takes twice as long to get to them.

Trackback URL for this entry: https://kickthemallout.com/trackback.php/Pink_Slip_Mail-In_Campaign