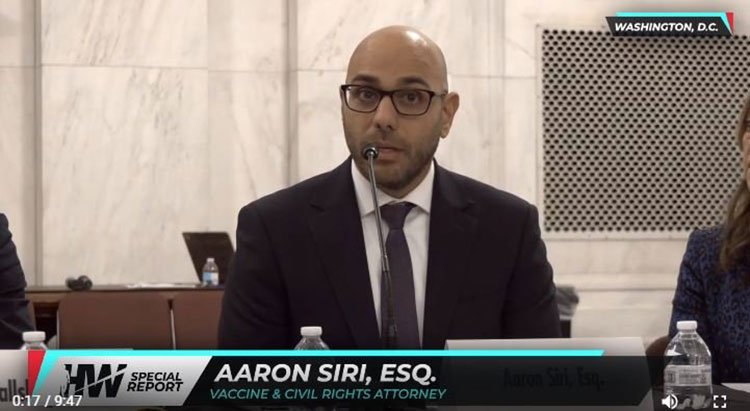 Attorney Aaron Siri, Managing Partner of Siri & Glimstad, published his first report on the information he received from the FDA.

Aaron Siri has a history of representing people for vaccination injury for quite a while he recently told a US panel discussion led by Senator Ron Johnson that during the COVID crisis their phones have received an avalanche of requests. Aaron added, “If we actually sued all of the pharmaceutical companies for all of the complaints it would actually impossible for all of the attorneys around the country, around 100, to handle all of those matters.”

Attorney Aaron Siri recently released the first batch of subpoenaed documents from the FDA on Pfizer’s COVID vaccine. The documents reveal that in the first few months of this year there were already 158,893 Adverse Events recording including 25,957 nervous system disorders.

Via Aaron Siri on Substack.

Two months and one day after it was sued, and close to 3 months since it licensed Pfizer’s Covid-19 vaccine, the FDA released the first round of documents it reviewed before licensing this product.  The production consisted of 91 pdf pages, one xpt file, and one txt file. You can download them here.

While it is for the scientists to properly analyze, let me share one observation.  One of the documents produced is a Cumulative Analysis of Post-Authorization Adverse Event Reports of [the Vaccine] Received Through 28-Feb-2021, which is a mere 2 ½ months after the vaccine received emergency use authorization (EUA).  This document reflects adverse events following vaccination that have completed Pfizer’s “workflow cycle,” both in and outside the U.S., up to February 28, 2021.

Pfizer explains, on page 6, that “Due to the large numbers of spontaneous adverse event reports received for the product, [Pfizer] has prioritised the processing of serious cases…” and that Pfizer “has also taken a [sic] multiple actions to help alleviate the large increase of adverse event reports” including “increasing the number of data entry and case processing colleagues” and “has onboarded approximately [REDACTED] additional fulltime employees (FTEs).”  Query why it is proprietary to share how many people Pfizer had to hire to track all of the adverse events being reported shortly after launching its product.

Trackback URL for this entry: https://kickthemallout.com/trackback.php/Pfizer_Documented_158893_Adverse_Events_in_First_Few_Months_of_Distribution