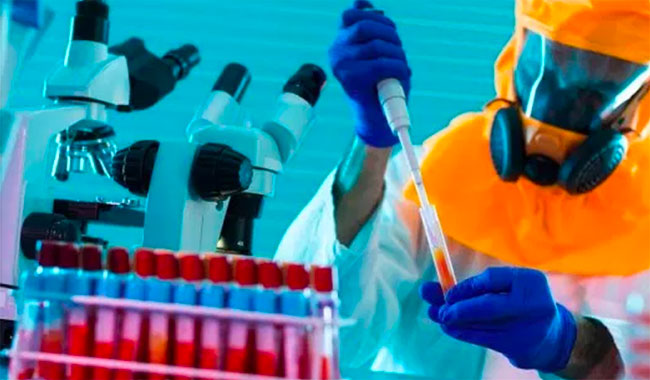 Back in 2014, due to safety concerns, the government suspended dangerous research that could make the bird flu virus more easily transmitted to humans.

It was a wise decision, but unfortunately, short-lived.

In February, Science Magazine revealed a troubling discovery: Last year, a U.S. government review panel decided to let the research resume. They actually want scientists to figure out how to make the avian flu more likely to kill us all and what’s more, they’re not telling us why.

Not only did the government approve the experiments, but they are also paying for them.

Here are additional details from The New York Times:

Two research teams, in Wisconsin and the Netherlands, have been told by the Department of Health and Human Services that their work is eligible for research funding from the United States government. The Wisconsin group was notified in October, and the Dutch group in January, a spokeswoman for H.H.S. said in an email.

Despite requests from The New York Times on Thursday and Friday, officials from H.H.S. did not explain why they had not announced their decisions on the two labs at the time they were made.

Spokeswomen for H.H.S. and the National Institutes of Health said the decision to lift the moratorium had already been announced in December 2017 when N.I.H. disclosed that the studies would be allowed, but only after newly created expert panels judged each proposal to be safe and scientifically sound. (source)

Many scientists are outraged.

The lack of information about the decision and how it was reached have provoked outrage from many scientists.

They oppose the research because they say it could create mutant viruses that might cause deadly pandemics if they were unleashed by lab accidents or terrorism.

The experiments, which were conducted by teams led by Yoshihiro Kawaoka of the University of Wisconsin in Madison and the University of Tokyo and Ron Fouchier at Erasmus University Medical Center in Rotterdam, the Netherlands, sparked worldwide fears when they were first revealed in 2011.

Here’s a bit of history on the controversial experiments, from Science Magazine’s report:

In 2011, Fouchier and Kawaoka alarmed the world by revealing they had separately modified the deadly avian H5N1 influenza virus so that it spread between ferrets. Advocates of such gain of function (GOF) studies say they can help public health experts better understand how viruses might spread and plan for pandemics. But by enabling the bird virus to more easily spread among mammals, the experiments also raised fears that the pathogen could jump to humans. And critics of the work worried that such a souped-up virus could spark a pandemic if it escaped from a lab or was intentionally released by a bioterrorist. After extensive discussion about whether the two studies should even be published (they ultimately were) and a voluntary moratorium by the two labs, the experiments resumed in 2013 under new U.S. oversight rules.

But concerns reignited after more papers and a series of accidents at federal biocontainment labs. In October 2014, U.S. officials announced an unprecedented “pause” on funding for 18 GOF studies involving influenza or the Middle East respiratory syndrome or severe acute respiratory syndrome viruses. (About half were later allowed to continue because the work didn’t fit the definition or was deemed essential to public health.) (source)

In case you are wondering what “gain of function” studies are (as I was), here’s an explanation from a 2014 statement from the National Institutes of Health:

For purposes of the deliberative process and this funding pause, “GOF studies” refers to scientific research that increases the ability of any of these infectious agents to cause disease by enhancing its pathogenicity or by increasing its transmissibility among mammals by respiratory droplets. (source)

That statement, which was published on October 16, 2014, concluded with this:

Public involvement in this deliberative process is key, and the process is thus designed to be transparent, accessible, and open to input from all sources. Consultation with the NSABB, the first step in this process, will take place October 22, and I encourage you to follow these deliberations closely. (source)

That transparency didn’t happen, and some scientists are upset because the government’s review will not be made public.

The lack of openness is “indefensible”

Harvard University epidemiologist Marc Lipsitch is one of the scientists who is not happy with the government’s decision,  “After a deliberative process that cost $1 million for [a consultant’s] external study and consumed countless weeks and months of time for many scientists, we are now being asked to trust a completely opaque process where the outcome is to permit the continuation of dangerous experiments,“ he told Science Magazine.

An HHS spokesperson told Science Magazine that the government cannot make the panel’s reviews public because they contain proprietary and grant competition information.

The government only confirmed its decision after Science Magazine learned of it and publicized the information.

Critics say the HHS panel should at least publicly explain why it thought the same questions could not be answered using safer alternative methods.

“Details regarding the decision to approve and fund this work should be made transparent,” said Thomas Inglesby, director of Center for Health Security of the Johns Hopkins Bloomberg School of Public Health in Baltimore, Maryland.

The lack of openness “is disturbing. And indefensible,” said Richard H. Ebright, a molecular biologist at Rutgers.

This virus poses an extremely significant threat to humans.

Back in 2012, Ebright told Scientific American that the deadly virus could pose a significant threat to humans:

“The primary risks are accidental release through accidental infection of a lab worker who then infects others — for which there are many precedents — and deliberate release by a disturbed or disgruntled lab worker, for which the 2001 US anthrax mailings provide a precedent. Bioterrorism and biowarfare also are risks.” (source)

And if you’re wondering how likely a lab accident is, here’s an article called A brief, terrifying history of viruses escaping from labs.

Lipsitch and Ingelsby outlined their concerns in an opinion piece for The Washington Post titled The U.S. is funding dangerous experiments it doesn’t want you to know about. Here are a few excerpts from that article.

Amazingly, despite the potential public-health consequences of such work, neither the approval nor the deliberations or judgments that supported it were announced publicly. The government confirmed them only when a reporter learned about them through non-official channels.

This lack of transparency is unacceptable. Making decisions to approve potentially dangerous research in secret betrays the government’s responsibility to inform and involve the public when approving endeavors, whether scientific or otherwise, that could put health and lives at risk.

No description of who reviewed these proposals has been provided. It is not stated what evidence was considered, how competing claims were evaluated or whether there were potential conflicts of interest.

But creating potentially pandemic pathogens creates a risk — albeit a small one — of infecting millions of people with a highly dangerous virus. For this kind of research, there is no justification for keeping risk-benefit deliberations secret. (source)

They’re trying to turn the bird flu into the human flu.

In an article for Forbes titled Scientists Resume Efforts To Create Deadly Flu Virus, With US Government’s Blessing, scientist and professor Steven Salzberg expressed concern over the decision to resume the research. He doesn’t hold back, beginning his piece with this statement:

For more than a decade now, two scientists–one in the U.S. and one in the Netherlands–have been trying to create a deadly human pathogen from avian influenza. That’s right: they are trying to turn “bird flu,” which does not normally infect people, into a human flu. (source)

For those who might not know, the 1918 influenza pandemic, which killed between 50 and 100 million people worldwide (3% of the entire world population at the time), was caused by a strain of avian influenza that made the jump into humans. The 1918 flu was so deadly that it “killed more American soldiers and sailors during World War I than did enemy weapons.”

Not surprisingly, then, when other scientists (including me) learned about the efforts to turn bird flu into a human flu, we asked: why the heck would anyone do that? The answers were and still are unsatisfactory: claims such as “we’ll learn more about the pandemic potential of the flu” and “we’ll be better prepared for an avian flu pandemic if one occurs.” These are hand-waving arguments that may sound reasonable, but they promise only vague benefits while ignoring the dangers of this research. If the research succeeds, and one of the newly-designed, highly virulent flu strains escapes, the damage could be horrific. (source)

Perhaps the most chilling statement from Salzberg is this:

This research has the potential to cause millions of deaths.

Way back in 2013, Lizzie Bennett warned about the risks of these experiments in the article Creating a Monster: Will Bird Flu Research Result in a Deadly Pandemic?:

Should H5N1 mutate sufficiently to move from a disease caught by those working in live bird markets, or those living and working with poultry in their immediate area, to a disease able to pass easily from human to human a pandemic is not just possible but extremely likely.

At the end of that piece, Bennett asked two important questions:

The fact is that bird flu will eventually mutate, the question is will science bring this down on us earlier than it would have happened naturally? Or will science save us by finding out how to stop the disease in its tracks?

“We are glad the United States government weighed the risks and benefits … and developed new oversight mechanisms. We know that it does carry risks. We also believe it is important work to protect human health,” Kawaoka said of being able to return to his research.

Exactly how dangerous is this research?

Here’s a quote that will give you a general idea of how dangerous this research is. Rebecca L. Moritz, a microbiologist specializing in biosafety and biosecurity, is involved with the bird flu research at the University of Wisconsin.

Ms. Moritz said local fire departments were directed not to enter the virus lab for any reason and if there was a fire, to let it burn. If someone working in the virus lab has a medical crisis, “first-responders are not able to reach them until they have been decontaminated by qualified lab staff,” she said. (source)

Now imagine if scientists could figure out how to make this transmissible between humans.

Why is the government being so secretive about these experiments?

Call me crazy, but I can’t help but suspect the government has undisclosed reasons for allowing this research to continue. I doubt it is to create stockpiles of vaccines because science can’t even do that for season flu viruses – they mutate too fast.

Could it be that this research is being conducted to create a bioterrorism weapon? Or, is it possible that another country (perhaps China or Russia) is working on this as well, and the U.S. is trying to beat them to it?

Is there a possible threat we aren’t being told about? Perhaps it is past time to start preparing for a pandemic, because natural or man-made, it is likely coming.

What do you think about this research?

Do you think there are possible benefits that make it worth the risk? Or do you think something nefarious is going on? Share your thoughts in the comments below.

Dagny Taggart is the pseudonym of an experienced journalist who needs to maintain anonymity to keep her job in the public eye. Dagny is non-partisan and aims to expose the half-truths, misrepresentations, and blatant lies of the MSM.

Trackback URL for this entry: http://kickthemallout.com/trackback.php/Our_Own_Government_Is_Quietly_Funding_the_Bird_Flu_Research_That_Could_End_Up_Killing_Us_All