Rats that were injected with Moderna’s experimental mRNA editing COVID vaccines developed rib malformations, according to documents newly obtained internal documents from the pharmaceutical giant via a Freedom of Information Act request by Judicial Watch.

The government watchdog obtained 700 pages document package from the pharmaceutical company including excerpts of Moderna’s formal Biological Licensing Application application, a form drug manufacturers are required to submit to the Food and Drug Administration for approval.

“The documents have not yet been made public, but were analyzed by former pharma executive Alexandra Latypova and reviewed by The Epoch Times,” The Epoch Times reports.

The documents also contain test results of reproductive toxicology tests conducted on rodents. The test results confirm Moderna’s gene-editing shots cause skeletal disfigurement in the offspring of rats that were injected with doses of mRNA-1273 or Spikevax mRNA.

Six of 149 baby rats had wavy ribs and 5 of those also had rib nodules, according to Moderna’s internal documents.

“mRNA-1273-related variations in skeletal examination included statistically significant increases in the number of F1 rats with 1 or more wavy ribs and 1 or more rib nodules. Wavy ribs appeared in 6 fetuses and 4 litters with a fetal prevalence of 4.03% and a litter prevalence of 18.2%. Rib nodules appeared in 5 of those 6 fetuses,” the document states.

“F1” refers to a rat’s offspring in the document, “litter” is a reference to a group birth of rats, and “wavy ribs” refers to ribs that are deformed. 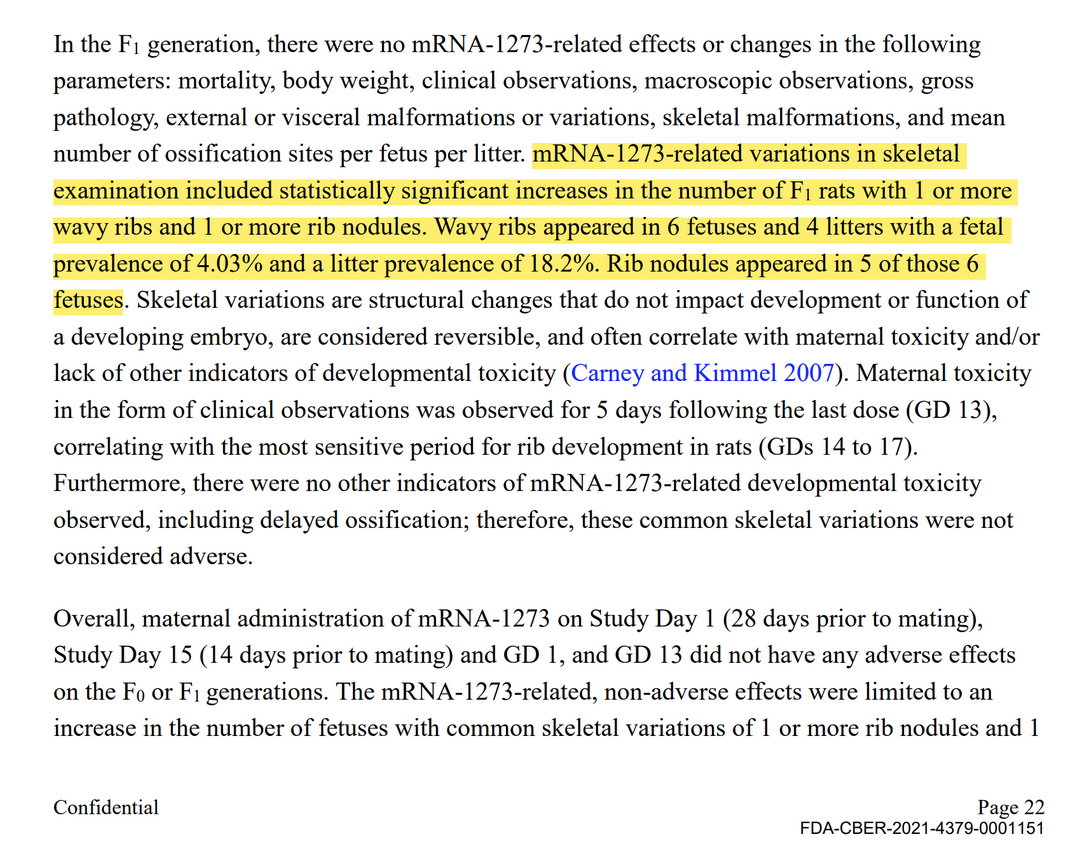 “Maternal toxicity in the form of clinical observations was observed for 5 days following the last dose (Gestation Day 13), correlating with the most sensitive period for rib development in rats (Gestation Days 14 to 17)” the documents state.

More from the Epoch Times:

“1/2 rats euthanized before delivery to examine fetuses, the rest followed to 21 days after delivery,” Latypova stated, “No numbers are provided for the study size.”

“Reproductive toxicology is the study of adverse effects of medicinal products on reproduction. The FDA requires reproductive toxicity testing for any NME to be used in women of childbearing potential,” according to Latypova, who has worked in more than 60 pharmaceutical companies, mainly focusing on creating and reviewing clinical trials, many of which were submitted to the FDA.

The FDA has assured the public COVID-vaccine are “safe and effective” and have no adverse effects on postnatal developments.

“No vaccine-related fetal malformations or variations and no adverse effect on postnatal development were observed in the study,” the FDA states on its January 30 label for Moderna’s Spikevax vaccine.

The Center For Disease Control are adamant that pregnant women get a COVID-19 injection.

Yet, doctors have warned still births are unprecedentedly rampant among fully vaccinated mothers.

Per court order, the FDA release Pfizer trial data each month.  According to a Pfizer adverse events report published on July 1, a staggering 44 percent of all women who participated in Pfizer’s COVID vaccine trial ended up losing their unborn babies. Pfizer maintains the abnormal number of still births has no correlation to it’s  COVID vaccination trial.

Meanwhile, National Institute of Health only began evaluating the effects of COVID vaccines on the immune responses of pregnant women in June.

Investigators evaluating the NIH study, MOMI-Vax,  enrolled approximately “750 pregnant individuals and 250 postpartum individuals within two months of delivery who have received or will receive any COVID-19 vaccine authorized or licensed by the U.S. Food and Drug Administration. Their infants also will be enrolled in the study,” the NIH states in a June 23 press release. “Participants and their infants will be followed through the first year after delivery.”

Trackback URL for this entry: https://kickthemallout.com/trackback.php/Newly_Obtained_Moderna_Documents_Show_mRNA_COVID_Vaccines_Cause_Skeletal_Malformation