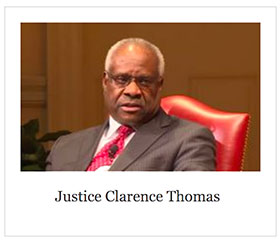 (CNSNews.com) - In his dissenting opinion in Obergefell v. Hodges, Justice Clarence Thomas predicted that the court’s declaration that same-sex marriage is a right would ultimately lead to conflict between that purported right and religious liberty.

In Obergefell, decided by a 5-4 vote in 2015, the Supreme Court declared that the 14th Amendment creates a right for people of the same sex to marry one another.

“The Court’s decision today is at odds not only with the Constitution, but with the principles upon which our Nation was built,” Thomas wrote in his dissent in Obergefell. “Since well before 1787, liberty has been understood as freedom from government action, not enti­tlement to government benefits. The Framers created our Constitution to preserve that understanding of liberty.

“Yet the majority invokes our Constitution in the name of a ‘liberty’ that the Framers would not have recognized, to the detriment of the liberty they sought to protect,” Thomas continued. “Along the way, it rejects the idea—captured in our Declaration of Independence—that human dignity is innate and suggests instead that it comes from the government. This distor­tion of our Constitution not only ignores the text, it inverts the relationship between the individual and the state in our Republic. I cannot agree with it.”

In his Obergefell dissent, Thomas went on to warn:

“In our society, marriage is not simply a governmental institution; it is a religious institution as well. Today’s decision might change the former, but it cannot change the latter. It appears all but inevitable that the two will come into conflict, particularly as individuals and churches are confronted with demands to participate in and endorse civil marriages between same-sex couples.”

“The majority appears unmoved by that inevitability,” wrote Thomas.

In the Masterpiece Cakeshop case decided today, the issue was whether the state of Colorado could make the owner of a small bakery create a wedding cake for the celebration of a same-sex marriage. 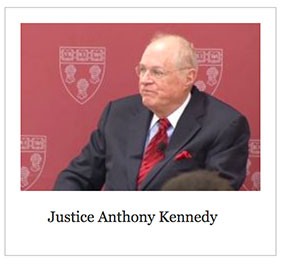 “Jack Phillips is an expert baker who has owned and operated the shop for 24 years,” Justice Kennedy explained in the opinion of the court. “Phillips is a devout Chris­tian. He has explained that his ‘main goal in life is to be obedient to’ Jesus Christ and Christ’s ‘teachings in all aspects of his life.’”

The baker indicated that he would gladly sell his other products to a same-sex couple and would make other types of cakes for them, but that he would not create a cake to celebrate their same-sex wedding. He argued that this violated both his First Amendment right to the free exercise of religion and his First Amendment right to freedom of speech.

The Supreme Court ruled 7-2 that the Colorado Civil Rights Commission, which held that the baker was required by law to make the cake, had in fact violated the baker’s right to the free exercise of religion.

But the opinion of the court, written by Justice Anthony Kennedy, was narrowly focused and turned on the court’s determination that the Colorado Civil Rights Commission had not been “neutral” toward the baker’s particular religious beliefs when it decided it could force him to bake a cake for a same-sex wedding. (Chief Justice John Roberts and Justices Stephen Breyer, Samuel Alito, Elena Kagan, and Neil Gorsuch joined Kennedy's opinion. But Gorsuch filed a separate concurring opinion joined by Alito and Justice Clarence Thomas also wrote a concurring opinion, which was joined by Gorsuch. Kagan wrote yet another concurring opinion joined by Breyer, and Justice Ruth Bader Ginsburg wrote a dissent that was joined by Justice Sonia Sotomayor.)

Under the court’s precedents, Kennedy pointed out, a business owner could in fact be forced to act against his religion but not because of state “hostility” toward his religion.

“Whatever the confluence of speech and free exercise principles might be in some cases, the Colorado Civil Rights Commission’s consideration of this case was incon­sistent with the State’s obligation of religious neutrality,” wrote Kennedy.

“The reason and motive for the baker’s refusal were based on his sincere religious beliefs and convictions,” Kennedy said. “The Court’s precedents make clear that the baker, in his capac­ity as the owner of a business serving the public, might have his right to the free exercise of religion limited by generally applicable laws.

“Still, the delicate question of when the free exercise of his religion must yield to an otherwise valid exercise of state power needed to be de­termined in an adjudication in which religious hostility on the part of the State itself would not be a factor in the balance the State sought to reach,” said Kennedy.

“That requirement, however, was not met here,” Kennedy said. “When the Colorado Civil Rights Commission considered this case, it did not do so with the religious neutrality that the Constitution requires.”

“The Civil Rights Commission’s treatment of his case has some elements of a clear and impermissible hostility toward the sincere religious beliefs that motivated his objection,” wrote Kennedy.

“That hostility surfaced at the Commission’s formal public hearings, as shown on the record,” Kennedy said.

In his concurring opinion, Thomas argued that the baker’s right to freedom of speech had also been violated.

“While Phillips rightly prevails on his free-exercise claim, I write separately to address his free-speech claim,” said Thomas.

“The conduct that the Colorado Court of Appeals ascribed to Phillips—creating and designing custom wedding cakes—is expressive,” said Thomas. “Phillips considers himself an artist. The logo for Masterpiece Cakeshop is an artist’s paint palate with a paintbrush and baker’s whisk. Behind the counter Phillips has a picture that depicts him as an artist painting on a canvas. Phillips takes exceptional care with each cake that he creates—sketching the design out on paper, choosing the color scheme, creating the frosting and decorations, baking and sculpting the cake, decorating it, and delivering it to the wedding.”

“He sits down with each couple for a consultation before he creates their custom wedding cake,” Thomas said. “He discusses their preferences, their personalities, and the details of their wedding to ensure that each cake reflects the couple.”

Thomas argues that wedding cakes are designed to communicate a message.

“If an average person walked into a room and saw a white, multi-tiered cake, he would immediately know that he had stumbled upon a wedding,” said Thomas.

“The cake’s purpose is to mark the beginning of a new marriage and to celebrate the couple,” Thomas wrote.

“Accordingly, Phillips’ creation of custom wedding cakes is expressive,” said Thomas. “The use of his artistic talents to create a well-recognized symbol that celebrates the beginning of a marriage clearly communicates a message—certainly more so than nude dancing.”

“Forcing Phillips to make custom wedding cakes for same-sex marriages requires him to, at the very least, acknowledge that same-sex weddings are ‘weddings’ and suggest that they should be celebrated—the precise message he believes his faith forbids,” Thomas concludes. 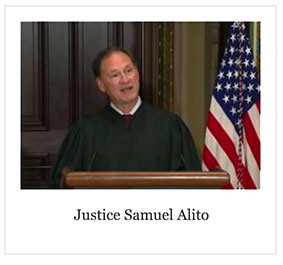 Then Thomas points back to the warnings in his own dissent—and in Justice Samuel Alito’s dissent—in Obergefell.

“In Obergefell, I warned that the Court’s decision would ‘inevitabl[y] . . . come into conflict’ with religious liberty, ‘as individuals . . . are confronted with demands to participate in and endorse civil marriages between same-sex couples,’” says Thomas.

“This case proves that the conflict has already emerged,” he says.

“Because the Court’s decision vindicates Phillips’ right to free exercise, it seems that religious liberty has lived to fight another day,” Thomas says.

“But, in future cases,” Thomas concludes, “the freedom of speech could be essential to preventing Obergefell from being used to ‘stamp out every vestige of dissent’ and ‘vilify Americans who are unwilling to assent to the new orthodoxy.’ Id., at__(ALITO, J., dissenting) (slip op., at 6). If that freedom is to maintain its vitality, reasoning like the Colorado Court of Appeals’ must be rejected.”

Kick Them All Out Project
http://kickthemallout.com/article.php/Justice_Thomas-America_Now_In_Conflict_Between_Religious_Liberty_and_Courts_Decree_On_Gay_Marriage