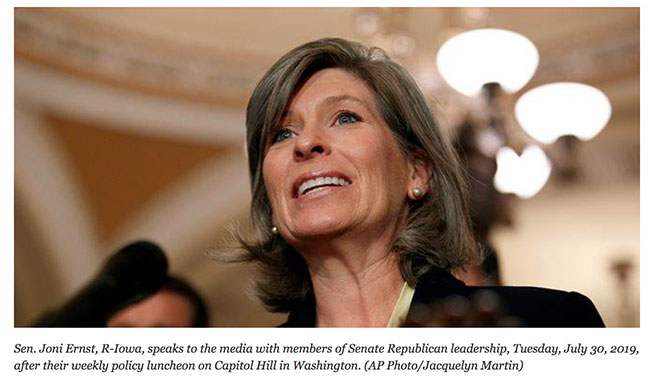 One of the scurrilous charges being thrown at President Trump by the imbeciles who make up the House of Representatives ‘impeachment managers’ in the ongoing travesty of the Senate trial is that somehow he damaged Ukraine’s ability to defend itself.

Facially, this is rather stupid. The first lethal aid provided to Ukraine ever by the United States arrived in April 2018. Prior to then, the Obama administration had focused on the really big ticket items like MREs and blankets. This fact, alone, should be enough to torpedo the whole nonsense about the short delay in delivering aid earlier this year being critical. In fact, none of the Javelin anti-tank missiles have yet been used in combat. But it wasn’t.

As if attempting to prove that military service does not imbue one with either manliness or honor, Colorado Representative Jason Crow claimed that the delay in military assistance caused the death of Ukrainian soldiers. This is a monstrous lie and should have been called out by someone in the Senate. But it wasn’t even the worst: 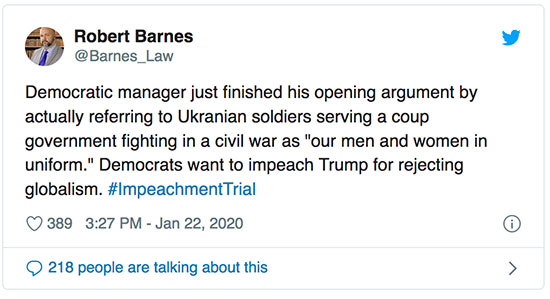 But if the truth was no barrier to the knowingly dishonest Democrat attacks on President Trump, you could be sure that mere hypocrisy would not be. And it wasn’t As it turned out at least four of the House ‘impeachment managers’ either voted against providing lethal aid to Ukraine, or declined to vote on the bill at all.

Joni Ernst: "The Democratic House Managers’ hypocrisy is on full display: they’ve spent most of their time lecturing the Senate on aid to Ukraine, yet four of them voted AGAINST legislation that provided the very same aid they’re lecturing us on."

And funny that 4 of the managers...actually voted NO, in giving aide to Ukraine...Hear Joni Ernst. pic.twitter.com/a0VegeeTW0

The Kick Them All Out Project
https://kickthemallout.com/article.php/Joni_Ernst_Asks_Why_is_Donald_Trump_Being_Impeached_Over_Ukraine_Aid_That_Most_of_the_House_Impeachment_Managers_Voted_Against