Vote Fraud: Last week prior to the Thanksgiving Day holiday a caller into talk radio giant Rush Limbaugh’s program made a bombshell revelation, provided it was accurate, into how Democrats may have flipped several congressional seats blue during the 2018 midterms in districts that, until now, had long been held by Republicans.

Limbaugh was discussing how every Republican incumbent lawmaker in reliably red Orange County lost their seats to Democrats, though results on Election Day indicated that most of them would retain their seats.

“Over half of those Republicans won on election night. Some of those Republicans won by eight points — and then counting the undervotes and counting the overbites and counting the late votes” occurred, he said. “I mean, we didn’t see what was going on out there because everyone was focused on Florida, the recounts in Florida. But they played games out in Orange County. To show you how odd it is, in Orange County the vote for the Republican candidate for governor of California was 200,000 votes higher than the Democrat got.

“Yet every Republican member of Congress loses? Some people think this is highly suspicious and are looking into it,” he added.

As well they should.

Shortly after Limbaugh began that segment he got a call from a woman named Mary who said she lived in Coronado, Calif. What she told him was nothing short of earth-shattering:

I am probably the last Republican in California, and because I got so fed up with the RINOs that I re-registered as an independent, and before the election, because I’m somewhat disabled, I requested online an absentee ballot as an independent. Immediately, I received two emails with absentee ballots and an invitation and welcome from Taylor Swift, and would I be able to help other voters to the polls? The following day I received four more ballots in the mail. So here I am with six ballots, and there’s nobody to report it to because nobody in the state would do anything about it.

Limbaugh seemed stunned by that — not simply the endorsement from entertainer Taylor Swift, who broke her political silence earlier this year to endorse the Democratic candidate for the U.S. Senate in her home state of Tennessee, former Gov. Phil Bredesen (he lost), but because the caller said she got six ballots from election officials.

She claimed she did not use them and that she eventually decided to go vote in person.

“She gets six ballots sent to her,” Limbaugh said of the caller. “She didn’t use them, but how many other people do you think did?”

That’s more than a fair question. The fact that most of those Republican incumbents who won on election day and whose districts fall within a county that voted overwhelmingly for the Republican gubernatorial candidate — and who all won their races handily in 2016 — is beyond suspicious.  (Related: POTUS Trump warns of severe legal consequences if anyone caught engaging in voter fraud.) 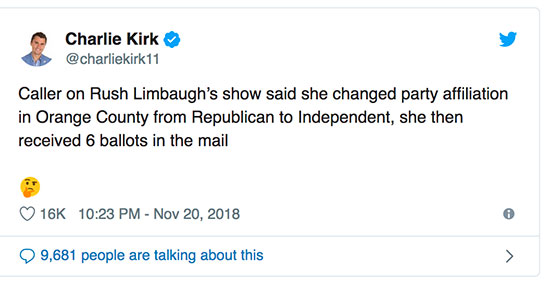 Others responded to his post that California also sent them additional ballots. A Twitter user named Alex Theismann wrote, “I can vouch for this. I don’t live in California and yet I received 10 ballots in the mail to vote in that state, with instructions to fill each one out with a different name and signature.” 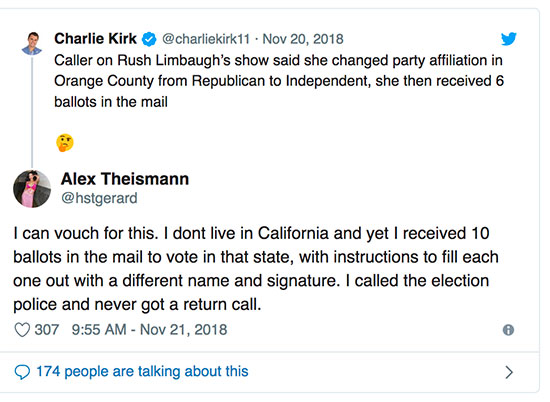 She added that though she notified “the election police,” she had not received a call back as of Nov. 21.

A user named “So Called” responded, “Yup. Happened to me too. I live in CT but received 14 California ballots with instructions which names to fill in. Instructions also said if I vote GOP they won’t be counted and will actually subtract from real GOP votes.” 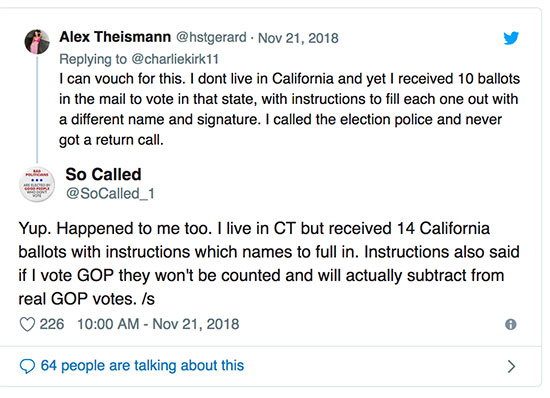 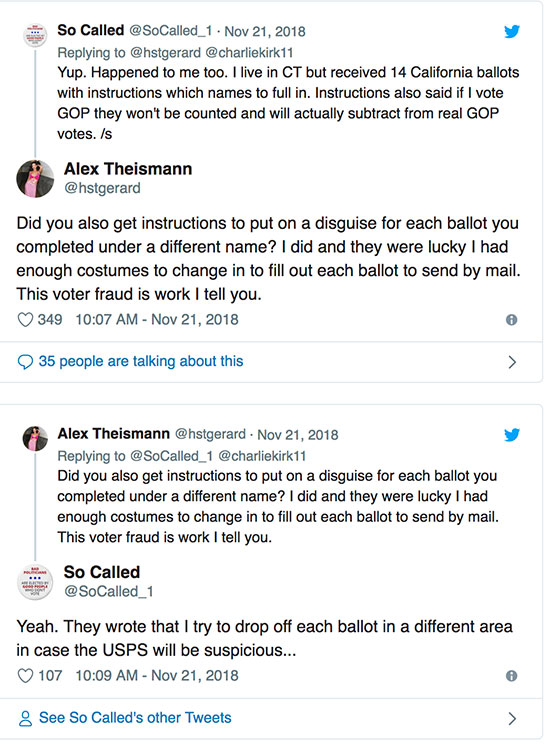 There appears to be enough circumstantial evidence to suggest that Democratic operatives in California have stolen at least a few of the races in Orange County. Is the Justice Department really investigating, though? And if not, why not?

The Kick Them All Out Project
https://kickthemallout.com/article.php/Its_Now_Clear_Democrats_Stole_Congressional_Seats_In_Californai-Heres_How_They_Did_It