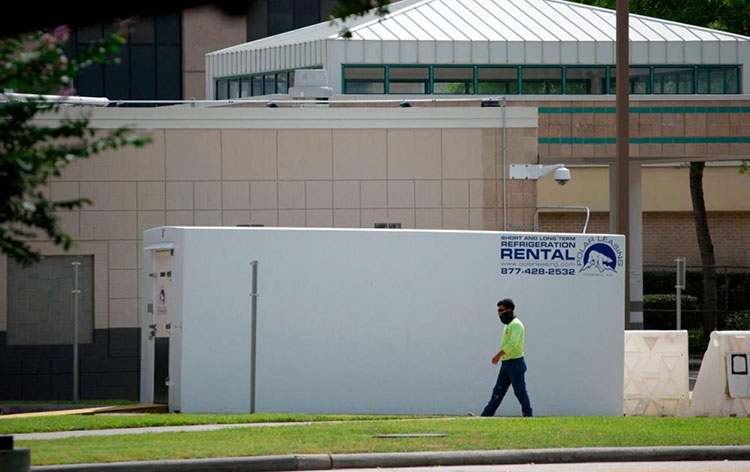 She added that the state's graph "gets updated every day with the new deaths by actual date of death." Poynter did not respond when asked if there was a way to see the date distribution from each day's new report of deaths.

The daily new death report often generates misleading sensationalist reports throughout the media. On July 7, for instance, the state recorded 117 "new deaths" on its dashboard. Calling that number a "record," CNN reported that Arizona that day reported "117 deaths from Covid-19 over the last 24 hours." Business Insider reported that Arizona recorded "its highest number of newly reported coronavirus deaths" on that day. News Break said the state on that date "recorded its highest single-day death toll."

Yet actual state data as of Saturday indicated that only 53 people are so far recorded as dying in the 24-hour period in question, 54% less than the "record" day touted in numerous headlines. Indeed, going by date of death, the most fatalities the state has ever recorded over 24 hours is 57, on June 30.

Florida Department of Health publicizes one number, quietly reports the other

A similar problem was seen in Florida this week, when the state health department on Thursday announced 156 deaths in one 24-hour period. That number was touted as a frightening new record by media outlets such as CNN, the Miami Herald, NBC, the Orlando Sentinel, and numerous others.

Yet as of Saturday aftenroon, the actual number of deaths confirmed for that 24-hour period, per the state's dashboard, was just 58—roughly one-third the "record" that the state health department touted on its website.

The department on its website notes that "death data often has significant delays in reporting, so data within the past two weeks will be updated frequently." Indeed, the death counts have risen on the state's dashboard since Thursday, though only moderately so.

Yet attempts to resolve the gap between the state's 156 reported deaths on Thursday and the much lower number on the state's dashboard resulted in a strange, almost incomprehensible exchange with a nameless representative of the agency.

Asked about the difference between what the Florida health department posted in its press release and what it reported on its dashboard, the official responded: "There was a technical issue on the Florida Department of Health dashboard this morning causing incorrect data to be displayed. The Department has diagnosed and fixed the issue. The numbers on the dashboard are now correct."

An immediate review of the state's dashboard indicated that the overall number of deaths had risen slightly following the state's "fixing" of the issue. When asked again about the discrepancy, the department responded: "The technical glitch cause [sic] the numbers today to be abnormally high."

After Just the News pointed out that the "fix" had actually raised the death numbers on the dashboard, the official responded: "The numbers now are correct. Earlier this morning there was a computer issue that caused all of the numbers to be elevated. That has now been resolved."

The department did not provide information regarding further requests for clarification of the nature of the "technical glitch," as well as why it publicized the 156 death number without noting how much lower the death-by-date rate was.

Though it makes a great deal of pandemic data accessible on its website, the Florida Department of Health has struggled with meaningful reportage of that data over the course of the pandemic.

A recent investigation by Just the News, for example, revealed that several of Florida's recent days of record-breaking infection rates appear to have been overstated by as much as 30 percent.

The overstatement arose due to how the Department of Health publicizes infection rates: It does so by reporting infections on the day they were logged in the state files, rather than the day that symptoms first appeared in a patient.

Trackback URL for this entry: https://kickthemallout.com/trackback.php/How_COVID-19_Fatality_Reports_Are_Distorting_the_Data_on_Daily_Death_Rates