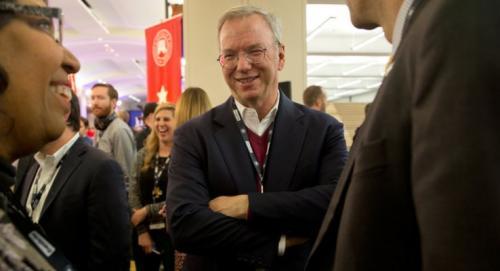 Google, pardon Alphabet's efforts to influence the American political discourse (not to mention presidential election outcome) stretch far beyond the company’s penchant for subtly disadvantaging independent and conservative thinkers on platforms like YouTube. By financially supporting left-leaning policy shops, Google’s parent company has helped raise a liberal army intent on hashing out policy minutiae to help bend US policy to their benefactors’ advantage.

But what happens when these supposedly “independent” think tanks publish something that displeases their corporate master? As one researcher at the left-leaning New America think tank learned, the punishment is swift and severe.

Barry Lynn, formerly a top researcher at New America, learned that lesson the hard way after publishing a paper praising European Union antitrust regulators for fining Google nearly $3 billion for purportedly rigging its search algorithm to favor its own services over its rivals.

According to the New York Times, the New America Foundation has received more than $21 million in funding from Google, Alphabet Chairman Eric Schmidt and his family’s foundation since the think tank was first established in 1999. The money helped establish New America as an “elite voice” in policy debates on the American left.

“But not long after one of New America’s scholars posted a statement on the think tank’s website praising the European Union’s penalty against Google, Mr. Schmidt, who had been chairman of New America until 2016, communicated his displeasure with the statement to the group’s president, Anne-Marie Slaughter, according to the scholar.”

Slaughter, a close ally of the Clintons who’s best known for her 2012 Atlantic Cover Story “Why Women Still Can’t Have It All,” quickly caved.

The statement disappeared from new America’s website, only to be reposted without explanation a few hours later. But word of Mr. Schmidt’s displeasure quickly rippled  through New America, which employs more than 200 people, including dozens of researchers, writers and scholars, most of whom work in sleek Washington officers where the main conference room is called the “Eric Schmidt Ideas Lab. The episode left some people concerned that Google intended to discontinue funding, while others worried whether the think tank could truly be independent if it had to worry about offending its donors.”

The answer to that last question, as employees of New America quickly learned, is, obviously, no, it can't. A few days after the incident Slaughter summoned to Lynn to her office, where she summarily dismissed him – along with 10 of his underlings.

“Those worries seemed to be substantiated a couple of days later, when Ms. Slaughter summoned the scholar who wrote the critical statement, Barry Lynn, to her office. He ran a New America initiative called Open Markets that has led a growing chorus of liberal criticism of the market dominance of telecom and tech giants, including Google, which is now part of a large corporate entity known as Alphabet, for which Mr. Schmidt serves as executive charman.

While she asserted in the email, which was reviewed by The New York Times, that the decision was ‘in no way based on the content of your work,’ Ms. Slaughter accused Mr. Lynn of ‘imperiling the institution as a whole.’”

Lynn, who eventually shared his story with the NYT, blasted Google’s aggressive tactics, which the company has denied through its communications machine.

And the punchline, which also serves as the title for this post: "Google is very aggressive in throwing its money around Washington and Brussels, and then pulling the strings.” said Lynn. “People are so afraid of Google now.”

In a series of statements published on Twitter, Slaughter and New America slammed the NYT’s story as “absolutely false.” 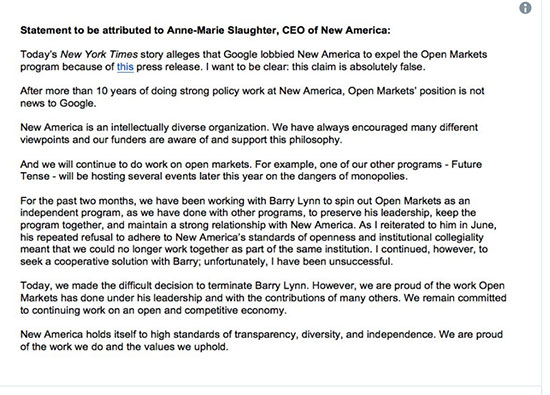 In a separate email sent last year, Slaughter castigated Lynn for organizing a conference where he intended to criticize tech companies’ hegemonic influence.

“We are in the process of trying to expand our relationship with Google on some absolutely key points,” Ms. Slaughter wrote in an email to Mr. Lynn, urging him to ‘just THINK about how you are imperiling funding for others.’”

Slaughter is now reportedly helping the Open Markets team secure financing for a new, separate nonprofit entity. However, no money will be forthcoming from Google.

Google spent more than $9.5 million on lobbying during the first half of 2017, more than almost any other company. It has helped organize conferences at which key regulators overseeing investigations into the company were presented with pro-Google arguments, sometimes without disclosure of Google’s role in funding NA, according to the NYT.

The company has also donated to more than 170 groups from across the political spectrum, according to voluntary disclosures on its website.

What was that about “don’t be evil”? 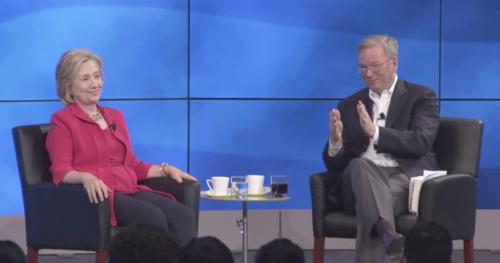 Trackback URL for this entry: https://kickthemallout.com/trackback.php/Here_Is_Why_People_Are_So_Afraid_of_Google_Now