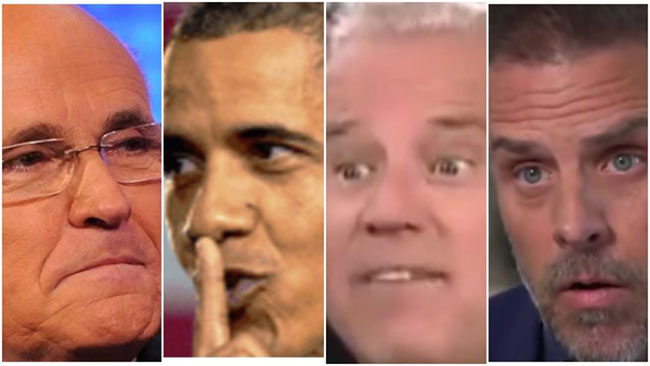 President Trump said that Rudy Giuliani, his personal attorney, will deliver a report to Congress and Attorney General William Barr about information he uncovered during his latest trip to Ukraine.

“He’s going to make a report, I think to the attorney general and to Congress. He says he has a lot of good information. I have not spoken to him about that information yet,” Trump told reporters Saturday.

“He has not told me what he found, but I think he wants to go before Congress ... and also to the attorney general and the Department of Justice,” he added. “I hear he has found plenty.”

Giuliani raised eyebrows this week when he traveled to Ukraine as the House conducts a whirlwind impeachment investigation into whether the president abused his power. Democrats say Trump overstepped his bounds by pressuring Kyiv to investigate former Vice President Joe Biden on unfounded corruption allegations and disproven claims that Ukraine was involved in 2016 election meddling.

During his trip, Giuliani met with multiple Ukrainian officials as he continued his campaign to convince American lawmakers Trump did nothing wrong.

Photos from the visit showed the ex-New York City mayor meeting with a former Ukrainian diplomat who has propagated the unsubstantiated claim that Ukraine interfered in the 2016 election. He also met with Yuriy Lutsenko, a Ukrainian politician, former prosecutor general and important figure in the impeachment inquiry, who proposed a joint corruption investigation between the U.S. and Ukraine.

Giuliani said Thursday that a probe into Biden is "a major obstacle to the US assisting Ukraine with its anti-corruption reforms." 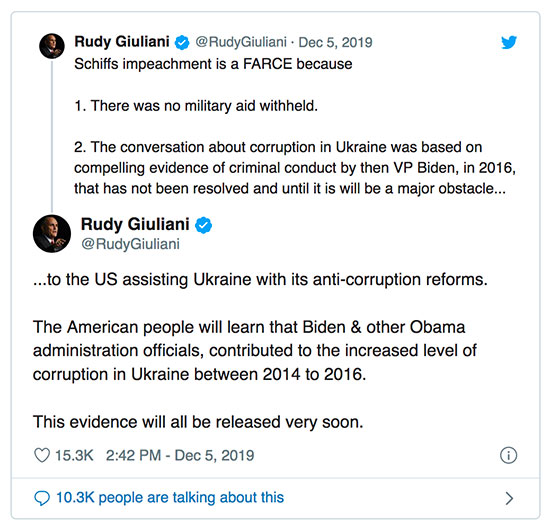 His trip to Ukraine shows the president's attorney has maintained his self-appointed role as Ukraine fact-finder even as he emerges as a central figure in the House’s impeachment probe.

Giuliani has been a chief proponent of the theory that Biden abused his power when he pressured Ukraine, as vice president, to fire a prosecutor who was investigating a natural gas company on whose board his son sat.

Biden maintained that he wanted the prosecutor fired for taking insufficient action to tackle corruption, and no evidence has surfaced to suggest Biden acted with his son’s interests in mind.

While Giuliani has been one of Trump’s staunchest defenders, the president and his allies have appeared wary of how much Giuliani's contacts with Ukrainian officials and frequent media appearances are actually helping the White House. Democratic lawmakers repeatedly point to Giuliani's activities as proof of wrongdoing.

“I think it’s a little weird that Rudy Giuliani is over in the Ukraine right now, and I’m not here to defend Rudy Giuliani,” Rep. Matt Gaetz (R-Fla.), a staunch Trump ally and member of the House Judiciary Committee, said on CNN. “There’s apparently an investigation going on, and that will go where it goes.”

Trackback URL for this entry: https://kickthemallout.com/trackback.php/Giuliani_to_Deliver_Report_on_Ukraine_Trip_to_Congress_and_AG_Barr