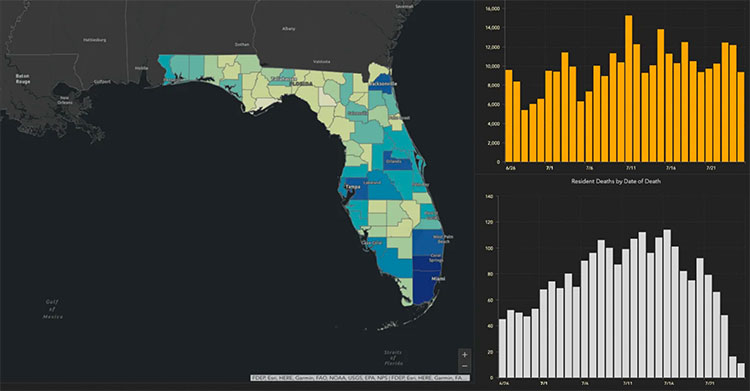 What do all these news accounts have in common?

So what characteristic do all of the reports share? They are all false.

It is also untrue than 2,013 had died in July when that story was published.

The difference might seem trivial. But it’s crucial because the press is using the timing of Florida’s death reports to whip up a frenzy about COVID-19 running riot in the state.

Take a look at the chart below. The blue bars are the number of deaths reported in four days last week. Notice the sharp uphill climb? That’s the story the press has been telling.

But those deaths didn’t occur on those days. In fact, the vast majority of them occurred days, or even weeks, before. The actual date of these deaths is indicated by the orange bars.

In fact, as of Sunday, the biggest one-day death toll so far in the state happened back on July 16, when 114 are known to have died. And when the press was claiming that 2,013 had died in July, the actual number of known deaths was 1,847.

As we noted in this space last week, this distortion is being repeated by the media in state after state that has seen a recent spike in coronavirus cases. While deaths attributed to coronavirus have increased, the “surge” is a fiction because many of those deaths happened earlier.

But almost no news outlet explains this difference clearly to readers. The Miami Herald is one exception.

In a recent story, it noted — after shouting about hitting a new record for daily deaths — that “the 173 deaths …. does not necessarily mean that every person died in the past 24 hours. In Florida, the deaths announced on a given day could be from several days earlier because the state information does not include the exact date of death.”

But even the Herald didn’t have to leave readers guessing as to how many of those 173 died in the previous 24 hours. Florida’s COVID-19 tracking site had it right on the main page. Of the 173 reported, the number of people who actually died that day was … 19.

This is only one of the problems with the death counts being shouted from the media rooftops.

Here again, Florida serves as a model of how to sow fear.

While 173 deaths reported in a single day sounds like a lot, it pales in comparison to the peak reached in New York and New Jersey earlier this spring.

New York’s reported deaths topped 1,000 on more than one day in April. That’s in a state with 9% fewer people than Florida.

New Jersey’s peak was 523 on April 20. That’s three times the current “record” set in Florida — in a state that has 59% fewer residents.

In other words, the current situation in Florida is nothing at all like what happened in the northeast in the spring. Yet that critical information never gets conveyed by the press.

Another bit of missing context is where these deaths are occurring.

Of the more than 5,000 coronavirus deaths in Florida, 45% of them involved residents and staff at long-term care facilities.

That’s not to say these deaths are less important. But it does provide a needed backdrop for everyone else in the state. Their risk is tiny by comparison.

This finding also shows that what’s needed most is to protect at-risk populations, something that the generalized lockdowns failed to do. Pretending that coronavirus “doesn’t discriminate” is a dangerous fiction.

Then there’s the fact that Florida’s death count is almost certainly inflated because the state is counting people who died with the virus, not just those who died because of it.

A report by CBS-12 in West Palm Beach, for example, found that the state has counted as coronavirus deaths:

A 60-year-old man who died from a gunshot wound to the head.

A 90-year-old man who fell and died from complications of a hip fracture.

A 77-year-old woman who died of Parkinson’s disease.

Out of 581 deaths attributed to coronavirus in that county, “The I-Team found eight cases in which a person was counted as a COVID death, but did not have COVID listed as a contributing cause of death.”

What’s more, only 169 deaths were listed as due to coronavirus without any other contributing factors.

(As a side note, why is a local TV news team digging into the numbers, while the national media are content to repeat whatever the government tells them?)

As we’ve said before, this sort of overcounting is going on nationwide, largely because the CDC has told states to report deaths this way.

The question that deserves to be answered is why the mainstream press seems so willing and eager to whip up fear, rather than provide all the relevant facts, in context, so the public can make its own informed decisions about how to respond to this disease.

— Written by the I&I Editorial Board

Trackback URL for this entry: https://kickthemallout.com/trackback.php/Florida_Is_A_Case_Study_In_Media-Induced_COVID-19_Panic