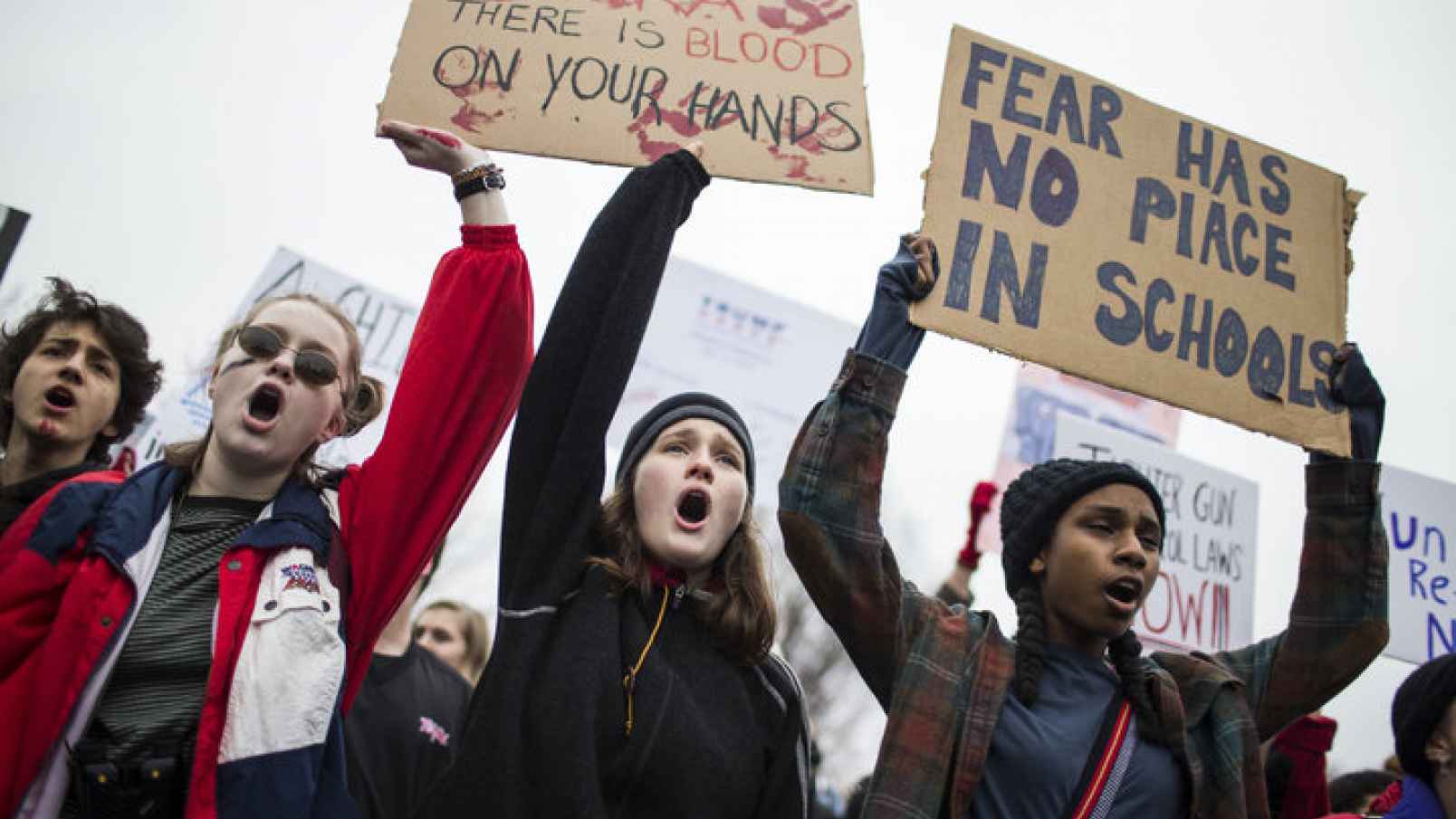 “We'll get you through your children," Allen Ginsberg to Norman Podhoretz.

Where did March for Our Lives come from?

We know where the organization, the money and the leadership come from.

But where do the hundreds of thousands of young people massing into crowds and calling for the abolition of the Bill of Rights come from? It’s not just the Right to Bear Arms: Freedom of Speech and of Religion have never been as unpopular among the youngest generation of voters as they are now.

They came out of the classroom. They’re the politically abused children preyed on by mental molesters.

Your local high school has some of the same radical programming as your local college. The toxic radicalism trickles down to elementary schools. And occasionally even begins in kindergarten.

Americans were shocked and disgusted at the sight of radical leftists dragging 5-year-olds out to participate in the walkout protests in Connecticut. But racist white privilege indoctrination is hitting kindergarteners in New York, Minnesota, Virginia, Missouri  and other states. Political indoctrination is being embedded in every subject, including math, with Teach for America pushing, “Teaching Social Justice through Secondary Mathematics”.  And teachers are usually radicalized before they ever enter the classroom with classics like Democracy & Education being replaced by Pedagogy of the Oppressed.

To radicals, your children and grandchildren are just another community to be organized into protests.

And while this political child abuse was going on in schools across the country, where were Republicans? If only some politicians would spend as much time protecting our children as they do the DREAMERs.

The racist creed of Black Lives Matter isn’t just making its way into Baltimore, Washington and New Jersey schools. You can find it being embedded in schools in Nebraska, Pennsylvania, Wisconsin and Kansas.

Walkouts against the Bill of Rights took place in Alabama and Iowa. At a Wyoming school, a test featured, "He was shooting at Trump" as an answer, and in a Utah school, a guest speaker declared himself, "Trump's worst enemy". Islamic indoctrination has found its way into schools in Kentucky, Florida, North Carolina, West Virginia and Missouri.

In Colorado, the Pledge of Allegiance began with, “One nation under Allah.”

Where are Republican legislators in these states doing while this political child abuse goes on?

Conservatives used to take, “We’ll get you through your children” to mean college campus brainwashing. But college students are adults. Children as young as 5 are now the targets.

And the politicians have mostly failed to do anything meaningful about it because they don’t have very good tools for handling the problem. When an individual incident goes viral, as some of these did, there’s outrage. But aside from reacting to that one incident, there’s no plan for preventing it from happening again. And none of the various halfhearted measures get at the very heart of the problem.

But the Freedom Center’s K-12 Code of Ethics does.

Featured at the Center’s latest project, Stop K-12 Indoctrination, the Code of Ethics challenges schools to focus once more on education, not indoctrination.

The K-12 Code frees students and parents from political indoctrination in the classroom. It encourages a return to the traditional virtues of inquiry over agenda, of traditional learning over mindless sloganeering. It reverses the Pedagogy of the Oppressed agenda by turning teachers from political advocates to learning facilitators.

The Code doesn’t bar students from studying controversial issues. It prevents teachers from endorsing candidates and judicial rulings. And from advocating for an issue embedded in a party platform. The classroom could be a forum for debate in which both sides are presented and neither side is penalized. But it is not an appropriate forum for one-sided advocacy and indoctrination.

Students can debate gun control. But they would not to be forced to enlist on one side of a political issue, like gun control, that appears in the Democrat platform.

And that would have made the shameful school walkouts against the Bill of Rights as unacceptable as they should have been.

With the K-12 Code, kindergarteners won’t be dragged out to protest against the Second Amendment, racist flags won’t hang over our schools and our children won’t be told that their race makes them racist. And teachers will no longer be pressured into dividing up students by race, sending them out to protest or teaching them that math and science are prejudiced concepts invented by dead white men.

Educational activists have turned the classroom into an activism space focused on the future. But the nature of traditional education has been to convey the wisdom, the information and the achievements of the past to enable students to envision their future as adult members of a national community.

Radical activists are busy destroying the past to make way for the future, pulling down statues, renaming schools, burning books and tossing out entire subjects, like math, as politically incorrect. The K-12 Code of Ethics liberates schools to convey to students the great heritage of human history. Because it is not the slogan of the moment that truly matters, but the lessons that we can learn from the past.

Students are not captive audiences. They’re not a community to be organized into street protests. And, most of all, they are not pawns to be used against their parents and grandparents by leftist radicals.

There can be no more excuses because there is a solution. And the solution is as simple as it is straightforward and fair. It does not bias classroom discussions to the right or the left. Instead it protects the educational spaces of our classrooms as neutral spaces of ideas instead of biased spaces of slogans.

Every day that they fail to act, more students are being politically abused. And politically abused children will show up at rallies against the Bill of Rights, they will threaten conservative speakers, phone in bomb threats and scream that any contrary opinion is an attack on their existence. The college campus radicals of tomorrow are coming out of today’s K-12 classrooms. And if we fail to act, then the left will win.

“We'll get you through your children," has become not just an empty threat, but a prophecy.

It’s time for our elected officials to help us get back our children from their leftist political kidnappers.

Trackback URL for this entry: https://kickthemallout.com/trackback.php/Dereliction_of_Duty